What's It Worth To Save The Sage Grouse? 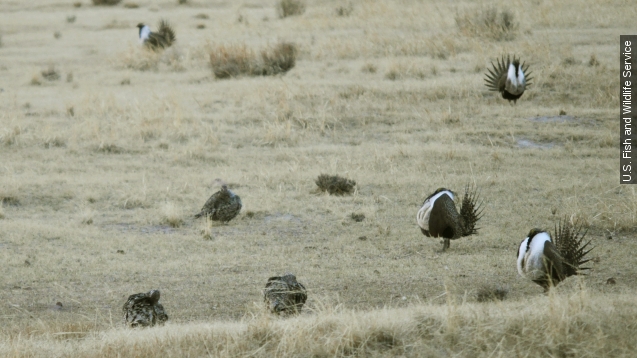 SMS
What's It Worth To Save The Sage Grouse?
By Evan Thomas
By Evan Thomas
September 16, 2015
Giving sage grouse endangered status would also protect their habitat from development, but that could also get expensive.
SHOW TRANSCRIPT

The greater sage-grouse is disappearing, and conservation officials hope it doesn't come down to listing the species as endangered because this little bird could get expensive. (Video via U.S. Fish and Wildlife Service)

A hundred years ago, there were 16 million sage grouse running around the western U.S. and parts of Canada. Now, the peculiar-looking ground bird — that sounds a bit like a coffee percolator — numbers in the hundreds of thousands. (Video via the Bureau of Land Management)

But a study funded by oil exploration trade group Western Energy Alliance suggests listing the sage grouse as endangered — which would protect its habitat from development and other land uses — would cause an annual loss of $5.6 billion in U.S. gross domestic product. Coal, natural gas, crude oil and beef industries could all be hit without use of that land. (Video via Cornell Lab of Ornithology)

With that kind of money at stake, the sage grouse gets a lot of play in Washington. Last year, congressional Republicans passed spending measures that prevented the Fish and Wildlife Service from granting the sage grouse endangered status. (Video via the Bureau of Land Management)

If it's not energy and housing development cutting into sage grouse turf, it’s bigger and more destructive wildfires or invasive species, such as Juniper, hogging all the resources. (Video via ABC)

"As they move in, they suck up all the available water, and the sagebrush can no longer thrive. And neither can the bunchgrasses and the fords, these flowering plants that are so essential to the development of sage grouse chicks," said U.S. Interior Secretary Sally Jewell. (Video via NBC)

As it stands, the Bureau of Land Management and private landowners alike are grouse-proofing 60 million acres in an unprecedented effort to save the species: cutting out juniper, marking fences and making water troughs safer for grouse to navigate. (Video via the U.S. Fish and Wildlife Service)

Lawmakers highlight plans to reduce the frequency and intensity of wildfires that damage grouse habitat. (Video via the Idaho Statesman)

But some officials, including Idaho Gov. Butch Otter, worry the existing BLM campaign already "threatens to overly restrict access to nearly 3 million acres by focusing on secondary threats to the species." (Video via Otter for Idaho)