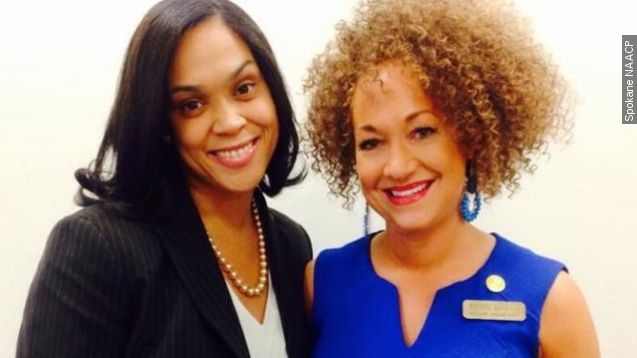 The president of Spokane, Washington's NAACP accused of lying about her race is stepping down.

This is Rachel Dolezal, president of Spokane NAACP. She's also a self-described black woman. But ask her family and you'll get a different answer.

"She wants to recreate reality, she wants to just invent it herself," Ruthanne Dolezal, Rachel's mother, told KHQ-TV.

"One of her adopted brothers who is part African-American tells ABC News exclusively that she's living a lie," ABC reports.

"She took me aside when I was over there and told me to make sure no one found out where she was actually from," Ezra Dolezal told ABC.

Dolezal made the announcement of her resignation on the NAACP Facebook page saying,  "It is with complete allegiance to the cause of racial and social justice and the NAACP that I step aside. ... Please know I will never stop fighting for human rights and will do everything in my power to help and assist, whether it means stepping up or stepping down, because this is not about me. It's about justice."

Speaking to the Spokesman Review, Dolezal's mother said the family's ancestry consisted of Czech, Swedish and German origin with traces of Native American.

Dolezal has claimed in the past that another man was her father, sharing photos on social media showing the two together. Though according to the Coeur d'Alene Press, the man bears no relation to Dolezal.

When pressed about the discrepancy by a local KXLY reporter, Dolezal didn't do much to help her case.

"Are you African American?" asked the KXLY reporter.

"I don't, I don't understand the question."

Last week, the NAACP spoke out in support of Dolezal, saying in a statement "One’s racial identity is not a qualifying criteria or disqualifying standard for NAACP leadership."

Still, Dolezal's past has come under scrutiny since the accusations and folks are now questioning her role as an adjunct faculty member teaching Africana Studies at Eastern Washington University.

Dolezal also serves as chairwoman on Spokane's Office of Police Ombudsman Commission. On her application, she reportedly identified herself as white, black and Native American.

The city is now investigating Dolezal to see if she violated any policies when filling out that application to get the volunteer position. (Video via City of Spokane)

This video includes an image from Justin Valas / CC BY NC SA 2.0.