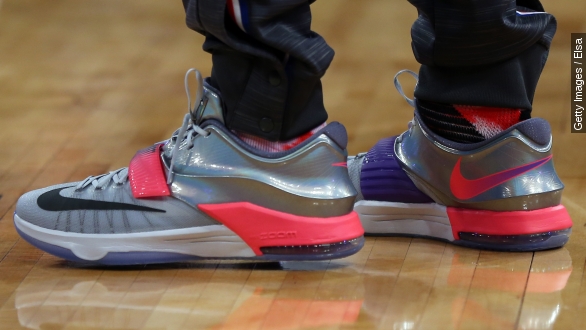 You might have noticed a certain Oklahoma City Thunder player putting up MVP-like numbers as of late, but not the one currently wearing the MVP crown.

No, last year's MVP Kevin Durant has been conspicuously absent from the Thunder lineup for most of the season — nursing a nagging foot injury.

Now the Thunder have announced the news they've been dreading all year — all-star and NBA scoring champ Kevin Durant is out for the rest of season.

The announcement came from Thunder GM Sam Presti Friday. He wrote in part: "It was the consensus of the specialists team ... a bone graft procedure would be the most proactive and recommended approach. Kevin will miss the remainder of the 2014-15 season."

Durant is now scheduled to have another surgery and is expected to miss four to six months — meaning the rest of the season and all of the playoffs.

So how did we get here? Well, let's back up.

Durant initially suffered what's called a Jones fracture in the fifth metatarsal of his right foot back in October of 2014. That led to surgery No. 1, which inserted a screw into his foot.

He was expected to miss six to eight weeks at the time but ending up coming back in seven. He played 27 games before experiencing more pain and undergoing a second surgery.

Durant never really healed from the second surgery and hasn't played since. Now he's up for surgery No. 3, a bone graft, next week.

As a sports medicine surgeon told USA Today's For The Win, Jones fractures can be slow-healing because of a low blood supply to that part of the foot.

And these fractures have been a consistent problem for other professional basketball players.

You might remember 7-foot-6-inch NBA superstar Yao Ming. Center for the Houston Rockets, Yao's career was ended by nagging injuries, including a Jones fracture in his left foot. So ongoing problems are a real possibility.

Alternatively, NBA big men Pau Gasol and Brook Lopez have both suffered similar fractures and managed to come back as solid contributors.

The Thunder currently have a record of 41 and 31 — good for the eighth playoff spot in the west.

And they're without another star at the moment as well. Forward Serge Ibaka underwent knee surgery in mid-March that was expected to sideline him for four to six weeks.

If all goes well, Durant is expected to be ready to play at the start of next season.

This video includes images from Getty Images and Anatomist90 / CC BY SA 3.0.