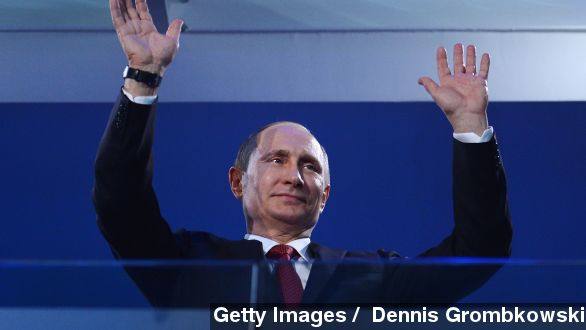 Vladimir Putin has a penchant for gold these days.

And is has nothing to do with the new gold-plated iPhones featuring his likeness.

With 1,149.8 tons in its vaults, Russia has emerged as the world’s biggest buyer of gold in the last decade. And this year, it’s stepping up its game — buying 37 tons in September alone.

And sure, the price of gold is falling, and it’s possible Vladimir Putin has simply spotted a good deal. (Video via RT)

But more likely, the gold buying is designed to counter the damage inflicted from falling oil prices and tough Western economic sanctions.

In recent months, the U.S. and its allies have increased sanctions on Russia’s financial, energy and defense sectors in response to the Ukraine crisis. (Video via Voice of America)

Those measures have caused the Russian ruble to drop, capital flight to increase and Russia’s international reserves to fall.

Russia’s central bank now says it doesn’t expect the economy to see any growth in 2015.

And that’s where gold comes in. Buying up gold is a way for Russia to diversify its assets, and reduce its dependence on the euro and the dollar.

AL JAZEERA: “Sanctions are blocking Russian mines from selling gold on the international market, so the Russian government has been forced to buy up all that domestic gold.”

But Russia’s not the only one on a gold buying spree. China has greatly increased its gold holdings this year.

Together, the goal according to The International Business Times, is to “undo dollar's supremacy as a key currency.

According to Bloomberg's recent survey of economists, there is a 70 percent chance Russia could fall into a recession within the next 12 months.

This video includes images from Getty Images and Центробанк РФ.