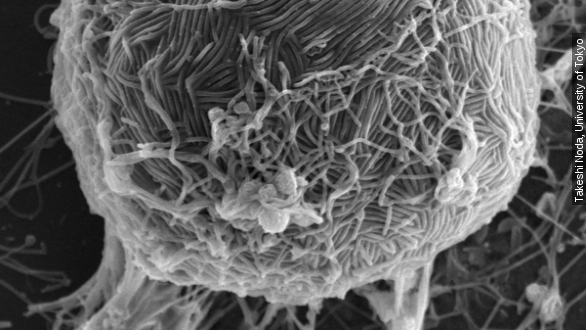 SMS
What's Different About This Latest Ebola Vaccine
By Kate Grumke
By Kate Grumke
March 26, 2015
A whole virus Ebola vaccine has been shown to protect monkeys exposed to the virus. Here's what's different about this vaccine.
SHOW TRANSCRIPT

A new whole virus Ebola vaccine has passed its latest test — it has been shown to effectively protect monkeys exposed to the virus.

There's been a lot of news since the outbreak in West Africa about various Ebola vaccines, but here's what's different about this one.

This vaccine, called a "whole virus vaccine," lets the immune system practice against an inactivated version of the Ebola virus. The University of Wisconsin-Madison professor who led the study says this vaccine "affords excellent protection" and is "very safe."

So far, other Ebola vaccines being tested only used pieces of the virus, or used other viruses that are engineered to express Ebola protein, although those vaccines have also created immune responses in early trials.

"In order for one to be infected by Ebola, it has to be the entire ebola virus. ... But what has happened is that a little piece of that Ebola has been inserted here. It is inactive and it cannot cause an infection," Ebola scientist Dr. Stephen Kennedy said.

Using the whole virus vaccine could be more effective, according to the researchers. They say it is more likely to trigger a broader and more robust immune response.

This one was created using an experimental method: researchers removed the gene in the virus that allows it to reproduce in host cells, which meant it was safe for researchers to work with the virus.

Human trials for some of the other vaccines have already begun in Ebola-stricken countries like Liberia, Guinea and Sierra Leone.

Human trials for this newer vaccine are the next step, but UW-Madison researchers point out that might not happen for a while because they are very expensive, costing millions of dollars.

Details on the vaccine were published Thursday in the journal Science.