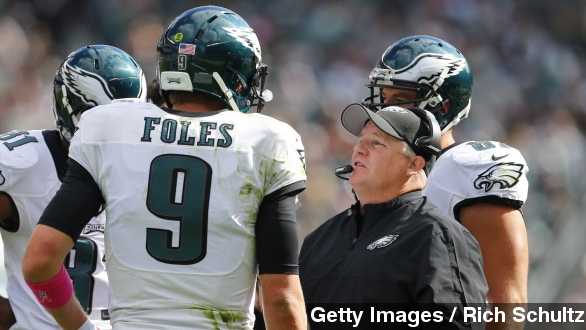 SMS
What's Chip Kelly's Plan For The Philadelphia Eagles?
By Matt Moreno
By Matt Moreno
March 11, 2015
This offseason, the Eagles have traded its starting quarterback and running back, and a free-agent wide receiver is expected to leave the team.
SHOW TRANSCRIPT

Chip Kelly MIGHT know exactly what he's doing ... or he might be turning the entire Eagles franchise on its head.

The Eagles' head coach, and now director of player personnel, is making everyone take notice that he's got full control of Philadelphia's roster.

The Eagles were reportedly close to signing former San Francisco 49ers running back Frank Gore to fill that void, but according to ESPN, he "got cold feet." Fox Sports adds Gore grew "wary" of Kelly and the Eagles' philosophy.

Then, Kelly followed that up by surprisingly trading starting quarterback Nick Foles to the Rams.

"Just all the sudden flip out like our coach. You're fired. Didn't Channel 3 want you at one point? Well, why don't you just go over to them? They're just across the way. You're fired," WTXF's Mike Jerrick joked.

Oh, and free agent wide receiver Jeremy Maclin isn't expected back on the team either.

So the Eagles' offensive depth chart from the start of last year is going to be looking a bit different.

It's prompting plenty of chatter about what the Eagles (and more specifically Kelly) are doing.

"Everyone's just kind of waiting to see where this leads. With each move, I think the doubt creeps in more and more that maybe there is no payoff. Maybe there is no genius move at the end of all these mystify moves," said Reuben Frank, Comcast SportsNet Philadelphia insider, on "The Dan Patrick Show."

Now, it's not to say Chip Kelly isn't a good coach or doesn't have a plan. The Eagles are 20-12 under him. It's just this many moves is ... different.

One possible theory for Kelly's wheelin' and dealin' is he's trying to trade up in April's draft to get former Oregon Ducks quarterback Marcus Mariota.

Mariota is one of the top prospects in the upcoming draft and potentially could go first overall.

Kelly and Mariota also have a bit of history. Kelly coached Oregon from 2007 through 2012 and recruited Mariota to the school.

Kelly talked to the media Wednesday about the Sam Bradford trade and added this: "I was offered a first round pick this morning from another team."

But during the conference, Kelly denied the team was selling out to move up for Mariota saying, "Marcus is a the best quarterback in the draft, but we'll never mortgage our future."

Other theories are a bit more controversial.

Whether or not Chip Kelly's plan, or maybe lack thereof, works will largely be based on the Eagles' 2015 season. Philadelphia hasn't won a playoff game since 2008.