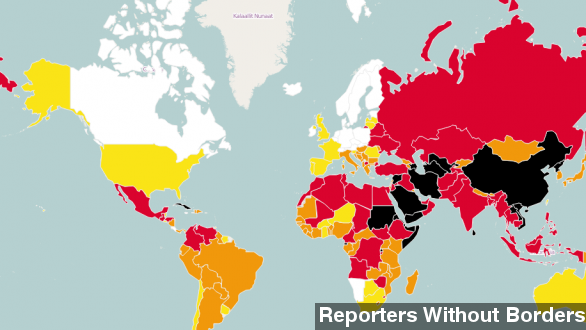 Reporters Without Borders released its annual World Press Freedom Index Thursday and revealed the U.S. has received its lowest score since 2006.

The U.S. is ranked 49th in the world — dropping from 46th — right behind Malta, Niger, Burkina Faso and El Salvador.

In comparison, our northern neighbor Canada was ranked 8th this year. Mexico, on the other hand, is 148th.

So, why did the U.S. slip so low this year? Reporters Without Borders lists a few cases that had a major impact on the U.S.'s score.

One important issue in the past year was the government’s ongoing attempt to get New York Times reporter James Risen to reveal his confidential sources for his reporting on the C.I.A. (Video via Democracy Now!)

"Journalists have no choice but to fight back, because if they don't they will become irrelevant," Risen told students at Colby College.

As the report points out, the U.S. doesn't have a federal shield law to protects journalists from revealing confidential sources.

Another factor that hurt the U.S.'s score this year was the treatment of reporters who were covering protests in Ferguson, Missouri this summer. This is a video Washington Post reporter Wesley Lowery captured before being arrested in August of 2014.

At least 15 journalists were arrested while covering the demonstrations. Other journalists report being harassed, hit with tear gas and shot with rubber bullets by the police.

The report also brought up US officials’ harassment of Wikileaks and its founder, Julian Assange. (Video via ABC)

The NSA's surveillance and criminalization of the website was revealed in documents leaked by former NSA contractor Edward Snowden.

And the report calls out the Obama administration for charging eight whistleblowers under the 1917 Espionage Act. Before Obama, only three people were ever charged under that act.

The rankings are based on a number of factors including media independence, transparency, and abuses. Overall violations of freedom of information rose 8 percent last year.