What Roles Do Baltimore's Gangs Play In The Protests? 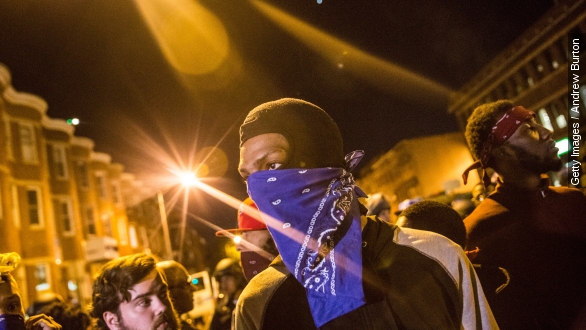 SMS
What Roles Do Baltimore's Gangs Play In The Protests?
By Ben Levin
By Ben Levin
April 29, 2015
As Baltimore continues to be wracked by violence and protests, gangs in the city have called a truce and been a surprising source of calm.
SHOW TRANSCRIPT

For more than a week, Baltimore has been the scene of growing protests as its citizens react to the death of Freddie Gray, who died in police custody on April 19.

This week, the protests took a violent turn, with some groups attacking and looting businesses and assaulting police. As of Wednesday, 20 law enforcement officials have been injured. (Video via PBS Newshour)

But from the chaos, some order has emerged from an unlikely source: Baltimore's rival gangs, who in the last few days have told the media they've joined forces with each other and with city leaders to protect their community.

“Yeah, a lot of them people may belong to certain things, but that don’t mean nothing 'cause we all united right now. It’s a bigger systematic problem that we got to deal with," one gang member told CNN.

The unlikely union comes after Baltimore Police claimed Monday the city's gangs had teamed up to kill officers.

"The Bloods and the Crips had a meeting yesterday. ... They said at the conclusion of Mr. Gray’s funeral day, each group was intended to kill and take out a police officer,” Police Commissioner Anthony Batts said.

At a press conference with pastors and a city council member, the gang denied having such a plan.

So, who to believe? So far, the gangs have been putting on a kind public face. Dave Weigel of Bloomberg reported that on Tuesday gang members formed a human chain in front of police to dissuade the crowd from attacking.

There's a lot we don't know about the bizarre situation. There's no way to verify that the people talking to the media are actually gang members, and the police stand by their report of a credible threat to officers but haven't released any other details.

A writer for The New York Times, though, reports at least some of the gang-involvement in the protests isn't completely benevolent: They report gang members directing looters away from black businesses toward Chinese and Arab-owned businesses nearby.