What Rights Do Immigrants In The US Have? 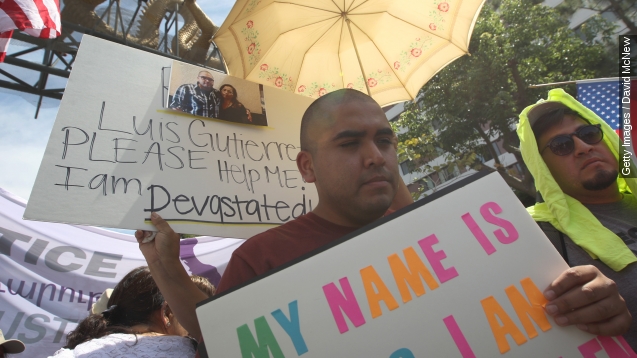 "We need to have a system that tracks you from the moment you come in, and then when your time is up ... then we go get you," New Jersey Gov. Chris Christie said at a press event in New Hampshire.

Chris Christie's proposal to track foreign nationals like FedEx packages is the latest in an ongoing immigration arms race.

But as the suggestions get more extreme, despite the fact that illegal immigration is down, here's a question: What rights do immigrants have? (Video via Donald Trump, CBS)

The Supreme Court established more than 100 years ago that the Constitution, through the 14th Amendment, grants everyone in the U.S., legally or otherwise, constitutional rights.

The only rights the Constitution itself guarantees exclusively to citizens are the rights to vote, run for office and work most federal jobs.

But in large part, immigrants, documented or otherwise, are guaranteed a lot of the same rights as citizens.

Cole wrote: "The fact that the Framers chose to limit to citizens only the rights to vote and to run for federal office is one indication that they did not intend other constitutional rights to be so limited. ... James Madison himself argued, those subject to the obligations of our legal system ought to be entitled to its protections."

But the laws governing foreigners haven't always been consistent with that sentiment, and the court itself has recognized that.

In upholding a 1940 law that allowed legal foreign residents to be deported for being communists, Justice Felix Frankfurter wrote, "One merely recognizes that the place to resist unwise or cruel legislation touching aliens is the Congress, not this Court." (Video via C-SPAN)

In the interim, Congress and the court have weaved in and out of agreement on foreigners' rights, especially since the start of the war on terror. (Video via ABC)

This video includes images from Getty Images, U.S. National Archives and U.S. Library of Congress and music from Little Glass Men / CC BY 2.0.