What Palestinians Stand To Gain From Joining The ICC 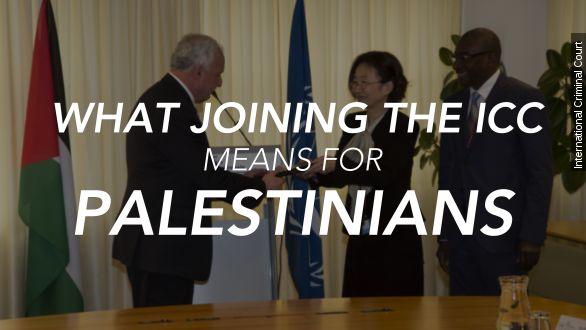 SMS
What Palestinians Stand To Gain From Joining The ICC
By Jake Godin
By Jake Godin
April 1, 2015
The Palestinian Authority was officially inducted into the International Criminal Court on Wednesday, and the advantage is twofold.
SHOW TRANSCRIPT

"As the Rome Statute today enters into force for the State of Palestine, Palestine acquires all the rights as well as responsibilities that come with being a State Party to the Statute," said International Criminal Court Vice President Kuniko Ozaki.

Palestine was officially inducted into the International Criminal Court on Wednesday.

But whether Israel comes under investigation over war crimes isn't up to the Palestinian Authority. Instead, it's the ICC's decision. And it's a decision that can only be made if "a State is unable or unwilling genuinely to carry out the investigation and prosecute the perpetrators." (Video via International Criminal Court)

Which brings us to the other advantage — the potential for Palestinian statehood.

For decades, the Palestinians have been pushing for this. One of their most recent successes was being declared a "non-member observer state" by the U.N. General Assembly in 2012.

Joining the ICC is seen as the next step in legitimizing Palestine as a full-fledged country and a way to end Israeli occupation. Israel, however, still says the only path to Palestinian statehood is through direct negotiations. (Video via Office of Palestinian Authority President Mahmoud Abbas)

But those negotiations might be a long way off after Israeli Prime Minister Benjamin Netanyahu's election promise that there would be no two-state solution on his watch. He has since backtracked on those words.

France is reportedly setting up another U.N. resolution vote on its own two-state solution based on Israel's pre-1967 borders.

This video includes an image from the International Criminal Court.