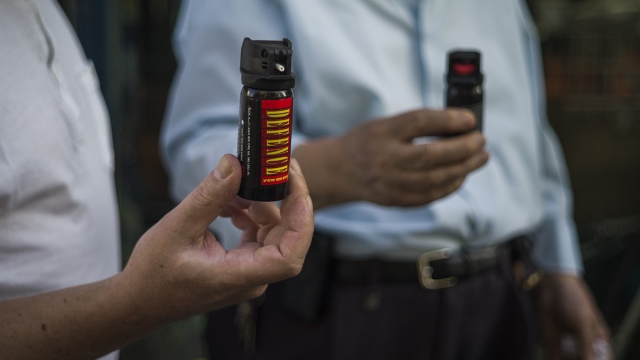 SMS
What NC's Bathroom Law Has To Do With Pepper Spray In Schools
By Ben Lawson
By Ben Lawson
May 11, 2016
A North Carolina school board is rethinking its decision to allow pepper spray in high schools.
SHOW TRANSCRIPT

A North Carolina school board has voted to allow high school students to carry pepper spray on campus. But now it seems the board is rethinking that decision after backlash from the community.

One board member at first cited the state's controversial bathroom law as the reason he voted in favor of allowing pepper spray on campus.

The law, which forces people to use public restrooms that correspond to the sex they were assigned at birth, is currently facing legal challenges from the federal government and advocacy groups.

Rowan-Salisbury Board of Education member Chuck Hughes said, "Depending on how the courts rule on the bathroom issues, [pepper spray] may be a pretty valuable tool to have on the female students if they go to the bathroom, not knowing who may come in."

But now Hughes is walking back those comments after he received backlash from the community.

He told BuzzFeed, "I was not thinking about the LGBT issue. Perverts and pedophiles taking advantage of this law in bathrooms was my major concern."

Hughes said he now will vote against the policy change that allows pepper spray and that other members of the school board are also willing to reconsider.

This video includes clips from WCCB, WTVD and WCNC, and images from Getty Images and blorgggg / CC BY 2.0.