What NASA Wants To Learn From Its 'Year In Space' Tests 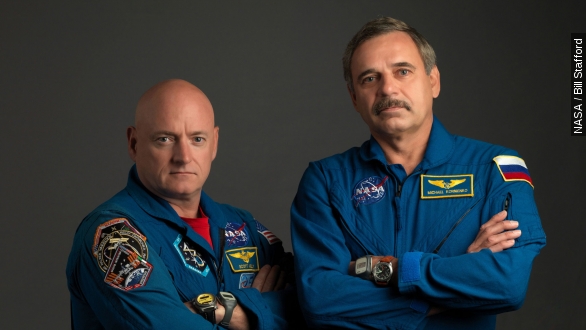 SMS
What NASA Wants To Learn From Its 'Year In Space' Tests
By Evan Thomas
By Evan Thomas
March 28, 2015
Astronaut Scott Kelly and cosmonaut Mikhail Kornienko will spend a year in space running tests on human physiology and psychology.
SHOW TRANSCRIPT

The latest crew for the International Space Station has arrived safely at the orbiting outpost, after a successful launch from Russia’s Baikonur Cosmodrome. (Video via NASA)

NASA astronaut Scott Kelly along with Russian cosmonauts Mikhail Kornienko and Gennady Padalka made orbit in less than ten minutes. (Video via NASA)

Both Kelly and Kornienko are set to make history on this trip: they’ll spend a year in space. This is the longest single mission a NASA astronaut has ever undertaken.

It’s not the case for the Russian Federal Space Agency: cosmonaut Valeri Polyakov spent almost 438 days aboard space station Mir back in 1994 and 1995.

NASA is in the unique position of being able to run comparative tests with Scott and his twin brother (and former astronaut) Mark Kelly here on earth. They’re the only siblings to ever have been in space.

And, since they’re identical twins, it’s a chance for NASA to see exactly how long space missions change an astronaut from an Earth-standard baseline, down to the genetic level.

NASA’s biology testing will explore the impacts of long-term space travel on the human body. It will study everything from sleep patterns and eyesight changes based on changes in pressure inside an astronaut’s skull; to immune system changes, microbial changes, and interpersonal relationships between crew members. (Video via NASA)

The idea is to identify and reduce risks of long-term space flight before NASA starts sending astronauts to other planets. A year is a long time to spend in orbit, but a mission to Mars is expected to take almost twice that time with current technology. (Video via NASA)

One NASA breakdown shows getting to Mars will take nine months at a minimum. And then you’re stuck on Mars. You can’t abort back to Earth because the planets won’t be aligned properly. Your rocket just wouldn’t have the fuel. It’s a three-to-four month wait for another alignment, and then another nine months in transit.

NASA’s long-term plans call for manned missions to Mars by the 2030s. Closer to here and now, Kelly and Kornienko will stay aboard the ISS until March 2016.