What Makes Yemen A Hotspot For Terrorists? 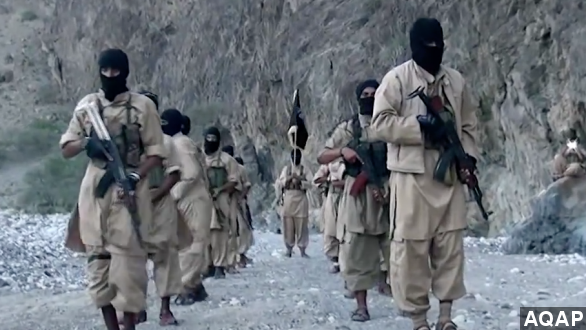 Yemen is, by all accounts, a failing state.

"... Al-Qaeda activity and extremist activity in Yemen,” President Obama said at the NATO Summit in Chicago in May 2012.

“We stand with Yemen against this violence," U.S. State Department spokeswoman Marie Harf said in December 2013.

It's therefore an attractive destination for Al-Qaeda’s most dangerous branch.

The country is the home base for Al-Qaeda in the Arabian Peninsula  — otherwise known as AQAP. For years, the group has plotted attacks against the West.

Both the so-called “underwear bomber” as well as the Fort Hood shooter were linked to the group.

In December, AQAP made headlines for kidnapping an American photojournalist.

And now we know Said and Chérif Kouachi spent time in Yemen before attacking Charlie Hebdo — an attack Al-Qaeda in Yemen claims to have ordered and financed.

When you think of strongholds for global terror networks, countries like Afghanistan, Iraq and Syria typically come to mind. So, how did Yemen become a breeding ground terrorists?

One big reason — political unrest there has created a security vacuum for Al-Qaeda to fill. (Video via Euronews)

The Yemeni government is dealing with both a secessionist movement in the south and a decade-long Shi’ite insurgency in the north. Experts are warning of civil war.

Also consider that terrorists often thrive in places where governments can't meet the basic needs of their people. (Video via AQAP / TRAC)

Yemen definitely fits that description. More than half the county lives below the poverty line. Forty-two percent of the population remains food insecure.

But U.S. drones strikes might be AQAP's most powerful recruiting tool yet. For over a decade, the CIA's targeted killing program has taken out top terror suspects in Yemen. (Video via PBS)

But the program's civilian casualties have gotten a lot of attention, too, and many Yemenis resent America for it. (Video via RT)

So, to summarize: combine a fragile government, sectarian violence and an impoverished population angered by drone strikes, and you have the perfect conditions for Al-Qaeda to set up home base.

Which it has. Today, it's estimated AQAP has over a thousand members — up from a mere 300 just six years ago.