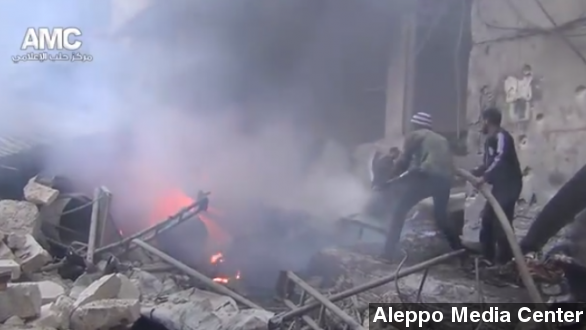 For two years, so-called barrel bombs have rained down on civilian neighborhoods in Syria. And for two years, the Assad regime has denied using them. (Video via YouTube / Syria Mubasher)

“There [are] no barrel bombs. We don't have barrels. I haven't heard of the army using barrels, or maybe, cooking pots. Like any regular army, we have bombs, we have missiles, etc.” Assad said during a BBC interview.

Here’s a look at what barrel bombs are and how they differ from conventional weaponry. (Video via AMH)

To start, they're cheap and easy to make. Usually they're oil barrels packed with metal shrapnel and explosive materials, like fertilizer. (Video via YouTube / Darya Revolution)

They're tossed out of helicopters from high altitudes. That's what appears to be happening in this video. (Video via YouTube / Finris Wolf)

They’re also incredibly imprecise, and that's what makes them so dangerous. When dumped on densely populated neighborhoods, they don't discriminate between residents and military targets. (Video via YouTube / Syria Archives 2013)

Despite a U.N. resolution banning barrel bombs, the Syrian civil war has seen an uptick in their use in recent months. (Video via YouTube / Souria Archives - Syria Archives #4)

Assad continues to insist his regime doesn't target civilians with barrel bombs or any other means, but the evidence suggesting otherwise is overwhelming.

His interview with the BBC Tuesday came just a day after activists say airstrikes carried out by his forces killed over a dozen civilians in the Syrian town of Douma. (Video via Die Syrische Revolution 2011)