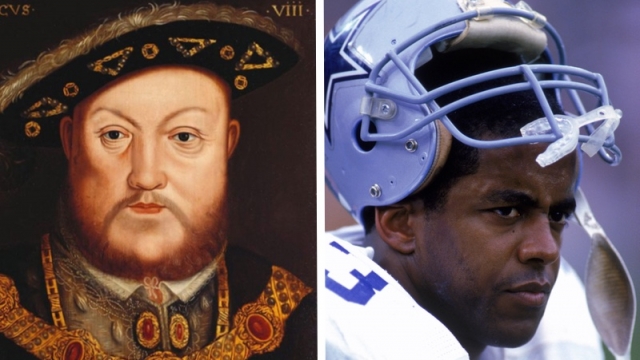 SMS
What King Henry VIII And Some NFL Players Might Have In Common
By Carter Woodiel
By Carter Woodiel
February 14, 2016
A recent study from Yale University suggests the much-talked-about monarch suffered from brain damage linked to playing sports.
SHOW TRANSCRIPT

What do some NFL stars and Henry VIII have in common? According to a recent study from Yale University, they both may have suffered from blows to the head that changed their personality.

The study's three authors chart Henry’s transformation from a well-meaning and healthy youth to an angry and deteriorating old man, and they credit his change to head injuries from playing sports.

Henry, of course, wasn't playing football; instead he likely hurt himself while jousting or pole vaulting. But the researchers say Henry's subsequent symptoms are remarkably similar to ones described by former NFL players.

"If I was to see you next week, if we saw each other again, would you remember me?" CNN reporter Sanjay Gupta asked former NFL linebacker Fred McNeill in 2010.

The Yale study said Henry's memory deteriorated in his later years. At one point, he ordered his wife to be sent away to the Tower of London and then forgot about it the next day.

"My erratic behavior — the least little thing ticks me off," former All-Pro lineman Leonard Marshall said in an ESPN documentary.

The study said Henry was easily provoked, had "explosive and murderous anger" and was prone to spur-of-the-moment executions.

The study also said Henry suffered from insomnia and had several bouts of depression, according to accounts from people close to him.

The researchers acknowledge they might never be able to prove a link between Henry's behavior and blows to the head. Still, the hypothesis allows us to view this much-talked-about monarch in a new light.