What Kept Some Shoppers Home This Black Friday 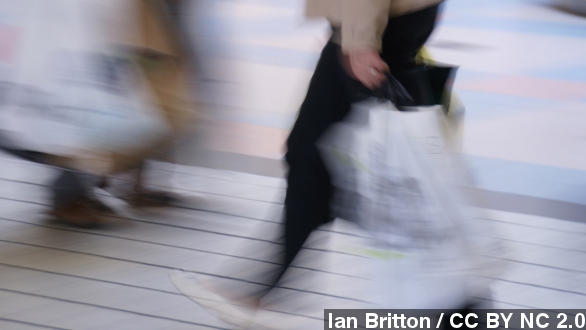 Did you notice the Black Friday lines were a tad smaller this year? If so, you're not alone.

Many stores decided to start their big sales on Thanksgiving day or earlier and some sales even last until Christmas, taking some of the pressure off Friday.

"Get great offers all month long at the Chevy Black Friday Sale."

Another possible deterrent was the demonstrators protesting in front of stores across the country.

This is video from Seattle where some demonstrators protested the verdict in the case of Darren Wilson, the police officer who shot and killed unarmed teenager Michael Brown in Ferguson, Missouri.

That same mall in Seattle was shut down because of protests. A group of more than 150 people participated in a "die-in" by lying on the floor of the mall.

And other demonstrators were protesting Walmart's treatment of employees.

"Walmart, Walmart, you're no good. Treat your workers like you should," protesters chanted.

Organization United for Respect at Walmart participated in what is being called the biggest Walmart protests ever with strikes planned in 49 states. The group called for Walmart to raise the pay for its worker and provide more full-time opportunities.

But the biggest factor keeping people away from stores is probably—you guessed it — the Internet.

Who wants to go to the store and wait in long lines when you can buy just about anything from your couch?

Experts are reporting a specific increase in "mobile traffic" when it comes to holiday shopping.

Custora reports smartphone and tablet shopping is now responsible for more than a fifth of online sales and online sales are up more than 15 percent when compared to last year.

And it was mobile traffic that crashed Best Buy's website Friday.

But it looks like a December day may take the cake this year for retail shopping.

ShopperTrak predicts "Super Saturday," the Saturday before Christmas, will be the busiest shopping day of the year.

On that day, all those last minute shoppers who don't have time to wait for their gifts to arrive might rush to the stores.

Sounds like me on every Saturday before Christmas... ever.

This video includes an image from Ian Britton / CC BY NC 2.0 and music from Kevin MacLeod / CC BY 3.0.