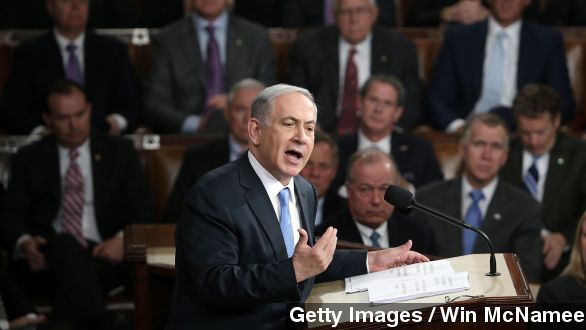 When Israeli Prime Minister Benjamin Netanyahu delivered his speech to Congress Tuesday, it was broadcast with a five-minute delay back in Israel. Israeli elections officials wanted to omit any parts of the speech that seemed partisan and could give him a boost in the polls.

Which he could use right about now. He's up for re-election in two weeks, and the polls have the race too close to call.

The intended audience Tuesday was arguably as much his own constituency as it was Congress. And the reactions among those voters was as you'd expect — divided pretty evenly along party lines.

The verdict on the left: Netanyahu's speech was nothing more than a political stunt.

"Iran's regime is as radical as ever," Netanyahu said.

His rhetoric was fiery but familiar, they said, and likely did little to sway the nuclear negotiations, now in their final stages. (Video via Office of Prime Minister Benjamin Netanyahu)

In an editorial, even the right-leaning Jerusalem Post agreed:

"Netanyahu’s speech came and went. The negotiations with Iran will continue. The US-Israel relationship will remain strong. The sun will come up tomorrow."

But for his supporters, Netanyahu's speech — during which he got a whopping 22 standing ovations — was strong and sent a clear message. (Video via Office of Prime Minister Benjamin Netanyahu)

"I think he delivered a very powerful case; that's hard to ignore now that this deal now effectively paves the way for a legitimized nuclear bomb," Naftali Bennett, former chief of staff to Benjamin Netanyahu, told told i24.

No surprise here: The speech didn’t play well in Iran. A spokeswoman for Iran's Foreign Ministry called it "boring and repetitive."