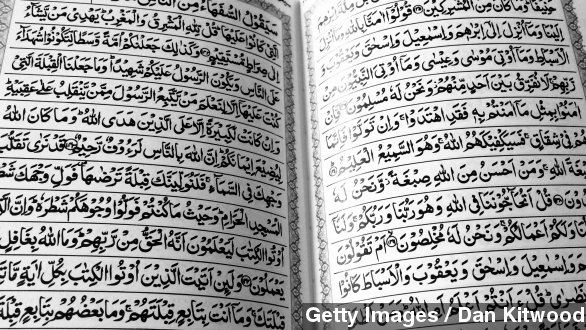 Witnesses heard the Charlie Hebdo attackers saying they killed the newspaper’s cartoonists to avenge the prophet.

And of course, there's a long modern history of radical violence in response to perceived blasphemy.

Pretty baffling, considering the Quran — Islam’s holiest text — doesn't even mention blasphemy and certainly gives no punishment for it.

In fact, throughout the centuries, portrayals of the prophet in Islamic art were common.

That said, there are some warnings against Muhammad imagery in a series of Islamic texts called the Hadith. The thinking is, even respectful images of the prophet could lead to idolatry. Of course, it’s not the respectful images that have been a source of controversy.

In 2006, unflattering Muhammad cartoons published in a Danish newspaper outraged the Muslim world — triggering protests that killed more than 50 people. (Video via CBS)

Similar protests erupted in 2012, that time over the low-budget anti-Islam film, “Innocence of Muslims.” (Video via ODN)

There’s a reason why Muslims — perhaps more so than followers of other faiths — take offense to depictions of their religious figures.  And it isn't necessarily about theology.

This is how Islamic scholar Reza Aslan explained it after the Danish cartoons were printed nearly a decade ago. “Most Muslims have objected so strongly because these cartoons promote stereotypes of Muslims that are prevalent throughout Europe.”

It's also worth noting the Quran doesn't call for violence as a form of punishment. That's something many of the world’s Muslim-majority governments have imposed on their own. (Video via PBS)

Blasphemy is a criminal offense in much of the Middle East and North Africa — punishable by death in some countries. In Pakistan alone, 14 people are on death row for insulting the prophet.

Many of those same countries condemned the Charlie Hebdo attackers for killing in the name of religion. That includes Saudi Arabia, which the day after the attack, publicly flogged a blogger for blasphemy.