What ISIS Hopes To Gain From Hostage Negotiations 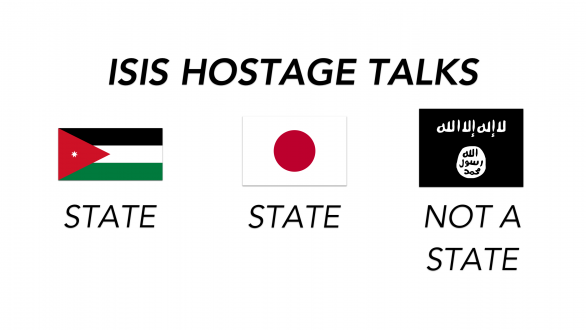 SMS
What ISIS Hopes To Gain From Hostage Negotiations
By Jake Godin
By Jake Godin
January 30, 2015
Negotiations with ISIS over Jordanian and Japanese hostages have seen little success in the past 10 days. What is ISIS hoping to gain?
SHOW TRANSCRIPT

If there's been one theme in the ongoing Japan-Jordan-ISIS hostage situation, it's uncertainty.

The original 72-hour deadline ISIS gave for the exchange of a $200 million ransom and two Japanese hostages passed with no word from ISIS and no payment from Japan. (Video via Cabinet Public Relations Office of Japan)

No one knew the fate of Kenji Goto, a freelance journalist, and Haruna Yukawa, a security contractor, until ISIS released a new video with a new ultimatum.

Then, after no action from Japan or Jordan, ISIS released its third message — this time giving both governments 24 hours to hand over al-Rishawi or else both Goto and a captured Jordanian fighter pilot, Moaz al-Kasasbeh, will be killed. (Video via JordanDays)

Jordan moved closer to a deal, and ISIS released its last message giving the government until sunset to release al-Rishawi. But Jordan instead demanded proof al-Kasasbeh was still alive. (Video via RT)

And now, 10 days and three missed deadlines later, the fate of Goto and al-Kasasbeh is still unknown.

The convoluted exchange is showing the pains of trying to negotiate with a terrorist organization that thinks of itself as its own nation and has proven it has no issue with executing hostages.

Speaking to CNN, the Asia-Pacific Foundation's security director says by successfully negotiating a prisoner swap, the group hopes to gain some measure of legitimacy as an actual nation.

As for why ISIS would want that, a former U.S. State Department counterterrorism official tells USA Today it would be something of a morale boost by appealing to those within ISIS and potential recruits.

Other motivations for ISIS could be showing its willingness to free its own prisoners or, as The Japan Times points out, an attempt to destabilize U.S. ally and coalition member Jordan.