What Is The First Amendment Defense Act? 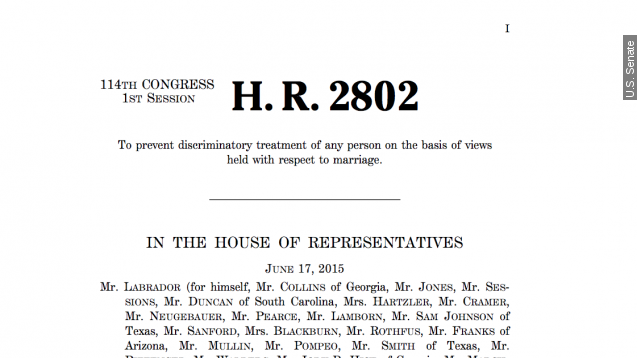 Its intent, as stated on the first page, is, "to prevent discriminatory treatment of any person on the basis of views held with respect to marriage."

Specifically, the bill would protect people from legal action for acting on the belief that marriage should be heterosexual. (Video via WIAT)

It would also protect religious institutions from losing their tax-exempt status for also acting on that belief. (Video via KGO-TV)

If that sounds familiar, it's because several states enacted or tried to enact similar laws as judges overturned bans on same-sex marriage over the past year. (Video via ABC, WSBT)

Since the Supreme Court decision effectively legalizing same-sex marriage, the effort by conservative politicians to legislate against it has picked up steam. (Video via CNN)

But it's a sharply partisan issue, and even if the bill managed to pass through Congress, it's unlikely it would have the votes to override a presidential veto.

And even then, it's unlikely it would effect cases like that of county clerk Kim Davis, for example. The Supreme Court rejected her appeal and has similarly rejected institutional definitions of marriage in the past by striking down the Defense of Marriage Act in 2013. (Video via CBS)