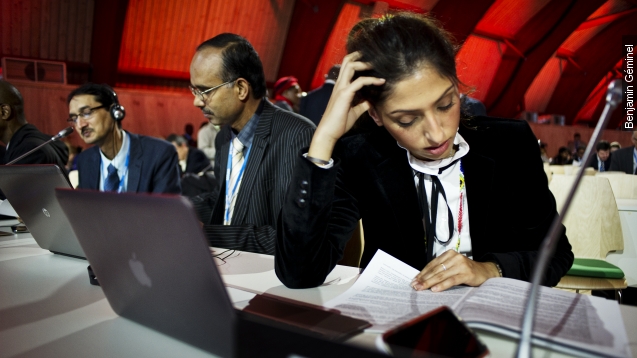 Paris climate talks are running out of time and are raising the question "what happens if they fail?"

It's hard to get 200 countries to agree on anything, especially when they run the gamut from richest to poorest. (Video via United Nations)

So instead, before the talks even started, countries submitted individual goals for cutting carbon emissions.

Those goals were meant to lay the groundwork for a deal, which would focus on ensuring countries stuck to the plans and collectively prevented a 2 degree Celsius warming over the pre-industrial average.

And those two parts of the deal have also been the main sticking points. Some countries are calling for a more ambitious 1.5 degree Celsius goal, and others can't agree on how to hold countries accountable without a legally binding deal. (Video via CCTV, CBC)

Without a goal, even the threat of peer pressure for countries not meeting their goals disappears. (Video via United Nations)

But more importantly, the $100 billion in annual assistance to developing countries that's part of the deal could fall by the wayside.

Without a deal, there's no framework for where that money's going to come from or how it'll be distributed.

Failure in Paris would deal the biggest blow to morale. Officials hoped a Paris deal could be a starting point for global cooperation on climate change. (Video via French Ministry of Foreign Affairs and International Development)

This video includes images from Benjamin Geminel and Arnaud Bouissou.