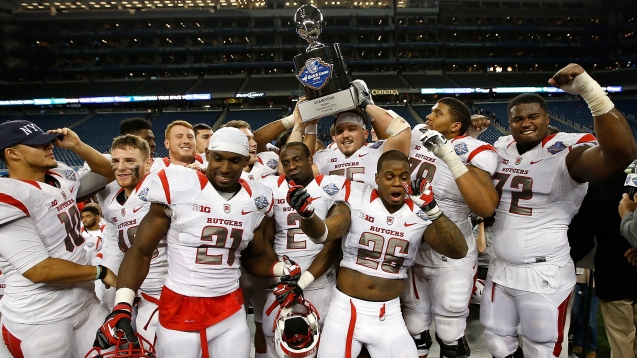 SMS
What Happens If NCAA Bowl Games Outnumber Bowl-Worthy Teams?
By Carter Woodiel
By Carter Woodiel
November 24, 2015
There might not be enough eligible college football teams to play in every bowl game this year. So what should the NCAA do about those empty spots?
SHOW TRANSCRIPT

College football now has more bowl games than ever. So many, in fact, they're running out of teams to play in them. And the NCAA doesn't know what to do about it.

A college football team has to win six games to qualify for a bowl. With nine bowl slots left to be filled, 15 teams are sitting on five wins, all but one of which have just one game left on the schedule. (Video via Virginia Tech Athletics)

This means all the slots will be filled next week if nine of 15 five-win teams get the W, something that's making NCAA officials sweat. A cancellation could be bad news because it could kill a bowl game, especially the smaller ones, for good.

Someone probably should've seen this coming. There has been an explosion of bowl games in recent years, spanning everywhere from Detroit to Alabama to the Bahamas.

All in all, there are now 40 bowl games, providing enough bowl slots for 63 percent of teams in college football's top division.

As for a possible solution, there's nothing on the books to account for this problem, so NCAA officials had a conference call Monday to begin hashing out a plan.

Though there's a possibility a few bowls won't be played, it's more likely open slots will be filled by five-win teams.

But which ones? CBS Sports reported Sunday it could come down to the NCAA's Academic Progress Rate, or APR, which it uses to measure the academic strength of teams and issue penalties if schools are falling short. (Video via Arizona State Athletics)

But APR has never been used in quite that way before, which would put college teams into bowl games based on how they performed in the classroom instead of on the field. (Video via Washington Athletics)

In any case, the chaos is providing hope to five-win teams and the nation's eight four-win teams that now sit one win away from bowl eligibility eligibility.