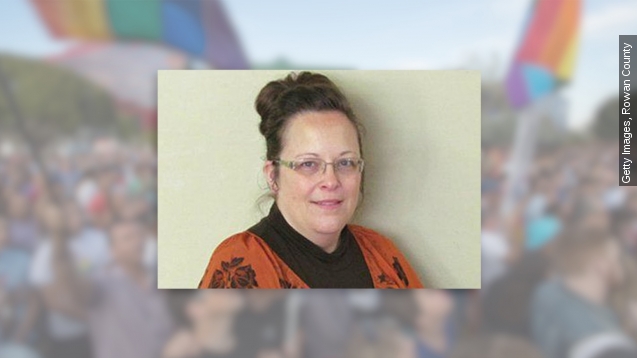 In a video captured by BBC News, Kim Davis said, "We are not issuing marriage licenses today."

"Based on what? Why are you not issuing marriage licenses today?" asked one protestor.

"Because I'm not," Davis responded.

She's still refusing even after the Supreme Court denied her request to be excused from issuing same-sex marriage licenses.

"Pending the appeal in the 6th circuit — the appeal stay has been denied," Davis said in a video captured by WLEX.

A protester replied, "The Supreme Court denied your stay."

But what will happen to the county clerk if she continues to refuse?

Well, Davis is an elected official, so she can't just be fired. She could be impeached but only by the state legislature.

Davis and her deputies have been ordered to appear before U.S. District Judge David Bunning.

That means she could be held in contempt of court — which could lead to fines or jail time.

State law could be changed to take clerks' names off of marriage licenses. But it's also unlikely Kentucky's governor will hold a special session to change the law. (Video via WYMT)

Two couples denied by Davis say they don't want her to go to jail. They're asking for her to be fined.

Davis and her deputies are set to appear in court Thursday.