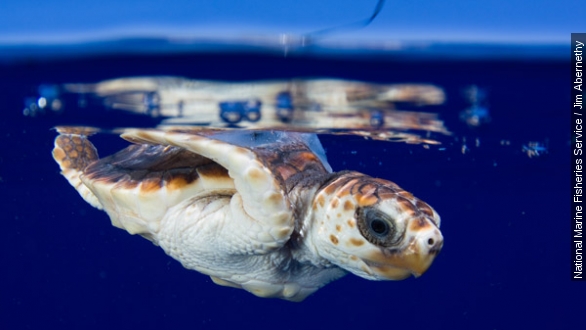 SMS
What Happens During Baby Sea Turtles' Lost Years
By Kate Grumke
By Kate Grumke
April 10, 2015
Scientists didn't know what happened between turtles first entering the sea and emerging on the coast years later. Now they have some answers.
SHOW TRANSCRIPT

After baby sea turtles hatch, they crawl up out of the sand and make their way to the ocean. But what happens next was pretty much a big question mark.

"The little dudes are just eggs," said Crush in Disney's "Finding Nemo. "We leave them on the beach to hatch, and then coo-coo-ca-choo, they're back in the big old blue."

The time between when the turtles hatch and enter the sea and when they show up again off the coast many years later is known as the "lost years," and scientists were pretty much just guessing what the palm-sized hatchlings were doing with their free time.

But now, researchers at the University of Central Florida's turtle lab have an answer for that question.

At first the little turtles went to the Gulf Stream, which is what scientists predicted, but then they started to do some unexpected things. They dropped out of the current in the middle of the Atlantic in the Sargasso Sea. Before, scientists guessed they just let the water carry them along.

And when the turtles swam away from the stream, they spent a lot more time at the algae-filled surface of the Sargasso Sea than scientists thought before. The researchers think they may do that to help them grow. (Video via PBS)

The researchers learned all this by sticking special satellite tags on the tiny turtles and studying what they were doing.

But a technology breakthrough led to much a smaller solar-powered tag. And, after a recommendation from a manicurist, the researchers discovered using the glue that holds on acrylic nails as a base coat worked great on the turtle shells, which are made out of keratin just like nails.

"It was actually really, this is women in science. ... It was kind of a keratin connection. ... Marisol of Not Just Nails recommended an acrylic nail fill kit that we tried out, painted on the back of the turtles, and sure enough instead of one to two weeks tag attachment in the lab it lasted upwards of two to three months," said lead researcher Kate Mansfield.

These new findings are especially important because the loggerhead turtles, and many other sea turtle species, are threatened. And it's pretty hard to protect something when you're not even sure where it is.