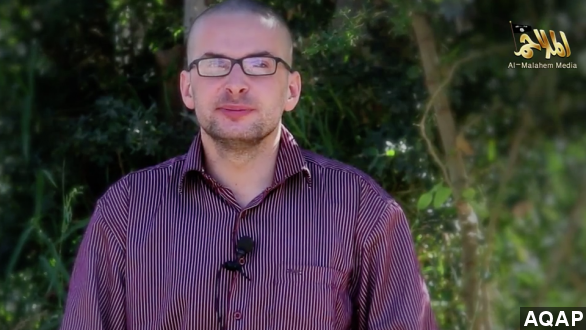 The infamous 1980 plan to rescue a group of Americans held hostage in Iran ended in disaster. Thirty years later, rescue methods have improved, but the missions remain risky. (Video via National Archives)

A 40-person team of Navy SEALS landed about 5 miles away from the compound in Yemen where Somers was being held. They approached the target on foot. When they got about 100 yards away, they lost the element of surprise — possibly due to a barking dog. A 10-minute firefight ensued, and Somers was shot in the crossfire.

"It was a very dangerous and complicated mission, but like always in these efforts, there's risk," U.S. Secretary of Defense Chuck Hagel said. (Video via MSNBC)

As Bloomberg observes, "Even if captives die in the attempt, they are spared becoming a gruesome spectacle on extremist videos."

There are four key ingredients to a successful rescue mission: surprise, intelligence, operator skill and deception. (Video via U.S. Department of Defense)

This according to Carlos Perez, author of "Anatomy of a Rescue." He writes, "The historical cases show that in every instance any one of these four principles was overlooked, the operation was doomed."

Faulty intelligence was the issue when the U.S. tried rescuing journalists Steven Sotloff and James Foley from ISIS. By the time Special Ops reached the target in eastern Syria, the prisoners had already been moved to a different site.

In November, President Obama ordered a review of U.S. policy on rescuing American hostages, but there seems to be a difference of opinion within the administration. This weekend, outgoing Defense Secretary Chuck Hagel said such a review was unnecessary.

This video includes an image from Getty Images and FreeJamesFoley.org / Nichole Tung.