What Four Years Of Conflict Has Done To Syria 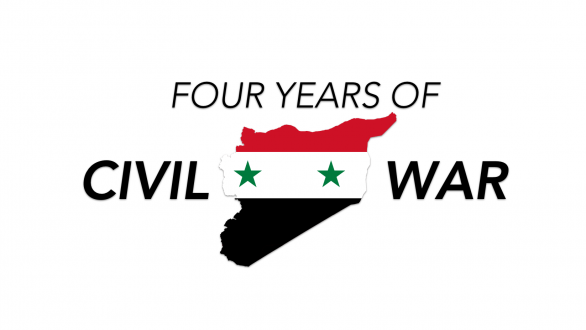 SMS
What Four Years Of Conflict Has Done To Syria
By Jake Godin
By Jake Godin
March 14, 2015
The Syrian Civil War is entering its fifth year as thousands have died and the country has been brought to ruin — so why isn't it getting coverage?
SHOW TRANSCRIPT

It’s been four years since the start of the Syrian Civil War when protesters calling for the release of political prisoners were instead met with brutal repression by President Bashar Al-Assad. (Video via Shaam Network)

The death and destruction that has devastated Syria since then is staggering. (Video via Halab News Network)

Estimates put the death toll from the conflict thus far at around 220,000, at least half of which were civilians. Last year alone saw 76,000 people killed. (Video via Syrian Defense Force)

The same report says more than 1.5 million Syrians have immigrated from Syria to escape the civil war while more than double that have been forced to flee as refugees. An estimated 6.8 million have been displaced within the country.

Perhaps one of the most drastic indicators of how much Syria has changed is the stunning drop in life expectancy — Syrians are now expected to die 20 years earlier than in 2010. (Video via Nabaa Media Foundation)

All of this is only getting worse in Syria as the civil war drags into its fifth year, and yet, it has seemingly taken the backseat to groups like ISIS in the media spotlight. Why?

Much ink can be spilled on the exact reason, but one thing is obvious — ISIS wants to be in the news and Assad doesn’t.

Any time ISIS gets inserted into a headline or TV graphic or has its footage broadcast on a news site is a recruitment opportunity. It’s arguably one of the central tenets of their propaganda.

Assad, on the other hand, tends to avoid Western media and when he does make an appearance, it doesn’t typically go well for his regime. Take his interview with the BBC’s Jeremy Bowen in February, for example. (Video via Alikhbaria Syrian)

Even as a campaign to tweet the names of 100,000 of those killed in the Syrian war starts up and the United Nations holds an exhibition in New York displaying graphic torture photos like these from Assad’s prisons, the flow of news over ISIS continues to dominate the headlines.

Jan Egeland of the Norwegian Refugee Council tells NPR, it’s a problem. “Beyond any doubt at all, the Islamic State, ISIS, has taken too much attention, in my view. They are part of the problem. They are not the problem.”

And now the United Nations Security Council is being blamed for the war’s continuation. A report titled “Failing Syria” issued by 21 aid organizations gave the council an F on its progress in protecting civilians, an F on providing international contributions for humanitarian aid and another F on pushing for a political solution to the war. (Video via United Nations)

The U.S. has renewed its call for Assad to step down. On Friday, it promised $70 million in non-lethal aid to the Syrian opposition coalition, bringing total aid since 2011 to $400 million. (Video via U.S. Embassy Damascus)