What Does '$uh?' Mean? Detroit Lions Fans Might Know 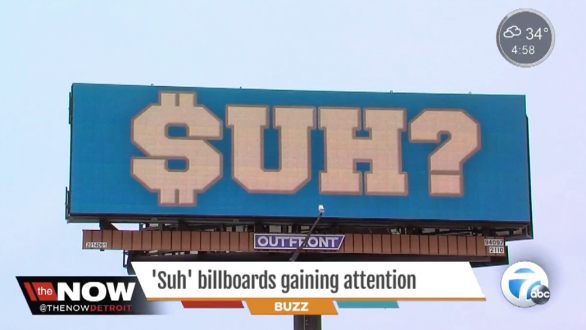 A billboard in Detroit has been grabbing drivers' attention. It reads $uh? — whatever that means.

Here are a few theories from our partners at WXYZ:

"I think it's asking the citizens of southeast Michigan, 'Is Suh worth the money?'" one local resident said.

"And in your mind?" asks a WXYZ reporter.

"It's got a dollar sign for the 's' so money talks," another resident said.

Suh is now a free agent after the Lions decided to not place the franchise tag on him. Doing so would've tied him to the team for another year.

ESPN's Mark Dominik says: "The reality is, the one thing you've got to be doing now is already putting your backup plan together. What are we going to do with a life without Suh?"

And as far as that billboard goes ...

The general sales manager for the advertising company displaying the billboard told the Detroit Free Press the company won't disclose who sponsored the sign but says it's the same fan group that paid for the "Detroit Lyin" billboards in the past.

That sign referred to a questionable call that contributed to the Lions' loss to the Cowboys back in January.