What Does It Mean To Be A Populist? 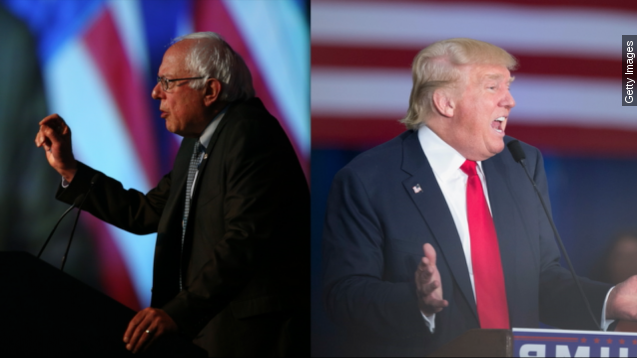 SMS
What Does It Mean To Be A Populist?

By Sebastian Martinez
September 3, 2015
The term 'populist' has been increasingly thrown around to label candidates like Bernie Sanders and Donald Trump. But what does it actually mean?
SHOW TRANSCRIPT

What does it mean to be a populist?

According to the Oxford English Dictionary a populist is "a person who seeks to represent or appeal to the interests of ordinary people."

In the context of the current presidential campaign, the term's been used to describe two candidates: Donald Trump and Bernie Sanders.

But as for comparisons to Trump?

"I don't accept that for one moment. We are not engaged here in demagoguery," Sanders told MSNBC's Andrea Mitchell.

Demagoguery: there's another word. The demagogue is the bad side of the populist coin.

"A political agitator who appeals to the passions and prejudices ... in order to obtain power or further his own interests."

Pundits have widely applied that label to Trump, citing his stance on immigrants, among others. Immigrants have long been a popular target of demagogues — that sentiment even spawned the mid-19th century Know Nothing Party here in the U.S. (Video via Donald J. Trump For President, Inc.)

But Trump's views are clearly representative of a significant amount of "ordinary people." So what makes him a demagogue and Sanders a populist?

One argument is Sanders' true convictions are evident because he's been arguing his platform for a couple decades. He campaigned on targeting big business and income inequality when he first got elected as a representative in 1990. (Video via C-SPAN)

"The fact that much of America is owned and controlled by relatively few people," Sanders told C-SPAN in 1990.

Whereas Trump has been publicly talking about illegal immigration for a couple years. (Video via Fox News)

Either way, the Sanders/Trump dichotomy shows how loaded the two words are. A candidate's supporters might describe them as a "populist," while their opponents will spring for "demagogue."

This video includes an image from Joseph Ferdinand Keppler and Getty Images and music from Chris Zabriskie / CC BY 4.0.