What Do Sports Outlets Cover When There Are No Sports? 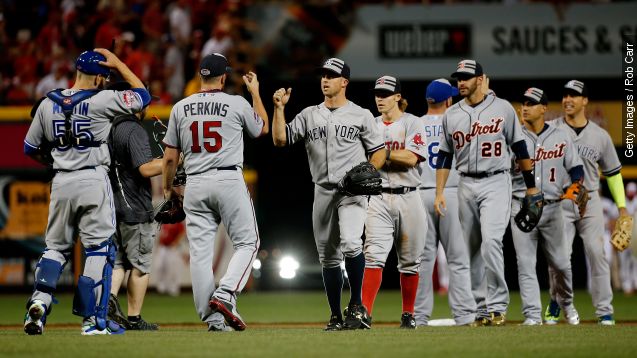 SMS
What Do Sports Outlets Cover When There Are No Sports?
By Matt Moreno
By Matt Moreno
July 15, 2015
The day after the MLB All-Star Game is notoriously known as the day without sports: There are no MLB, NFL, NBA or NHL games Wednesday.
SHOW TRANSCRIPT

As MLB players head back from their stint at the All-Star game and PGA golfers prepare for their next big challenge, Wednesday provides a particularly tricky day for sports media outlets.

That's because there's no major sports at all. With the NBA, NFL and NHL all in their offseasons and the MLB and PGA in between competitions, there's not much happening.

Last year, a Washington Post writer looked at sports stories on this day as far back as 1962 and, as the headline suggests, it did not go well.

"Martinez hitless in his one at-bat, but besides that not a whole lot."

"Okay. We appreciate it."

As of Wednesday morning, many of the major sporting outlets went with All-Star game recaps, though those stories certainly wouldn't stick the entire day. In the past, many have opted for previews of the British Open which starts Thursday.

Boston.com writes this year the NFL could come down with an answer to Tom Brady's deflategate suspension appeal because, "There is less than nothing going on in the sports world. The NFL would love to steal a Wednesday in the summer."

If you're ESPN, you could always make your own sports news too. Since 2002, ESPN's hosted the ESPY Awards the day after the All-Star break. What better way than to make the sports news come to you?

So there you have it — a day without sports might be survivable after all. Relief is on the way though. The British Open starts bright and early Thursday morning.