What Do Lawns Cost Us? 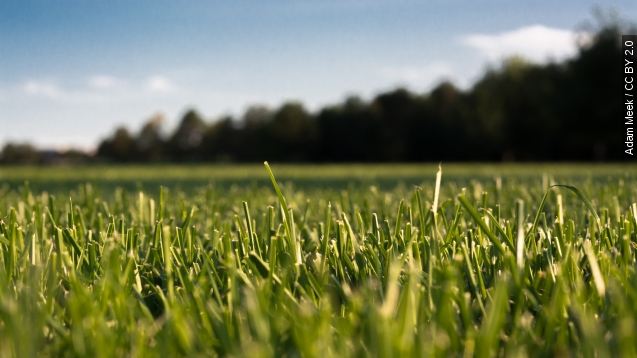 What do lawns cost us?

Lawns are a lot of work to maintain. They can be environmentally harmful and require a lot of water. (Videos via John Deere, University of Wyoming)

How much? On average, a third of public water, according to estimates from the Environmental Protection Agency. In hotter and dryer areas, that share goes up quite a bit. (Video via YouTube / Edward Calvey)

For perspective, in the continental U.S., lawns take up an estimated 40 million acres of land, more than any crop that we can actually eat, like corn or soybeans.

Watering those lawns takes trillions of gallons of water a year, again, more than any other crop we consume.

That’s in part because we have so much lawn and also because turf grasses are thirsty. (Video via Pennsylvania State University)

They have shallow root systems, which depend on relatively frequent watering to stay green. But even so, we tend to overwater them. A group of researchers from the University of Florida wanted to know why. (Videos via PBS / "This Old House," City of London, Ontario)

Through focus groups, they found one of the major factors is a lot of confusion about good lawn care. (Video via eHow)

They found homeowners weren't sure exactly how often they needed to water their lawns to keep them green, so they overwatered, conditioning their lawns to need more water and leeching nutrients from the soil. (Video via Aquatech Solutions)

Participants said the associations often warn or even fine homeowners whose lawns lose their green. They also can be obstacles for people who want to switch to lawn alternatives, like native plants or rock gardens. (Videos via Community Associations Network, Missouri Botanical Garden)

The researchers say their main reason for studying lawns was to help find a solution to water conservation problems. The amount of water it takes to satisfy our lawns could cure California's drought almost two times over. (Video via California Department of Water Resources, Iowa Public Television)

But ditching or at least cutting back on lawns would do more than cut water waste.

From an ecological standpoint, lawns are basically useless. Most of the grasses aren't native, and because of that, native wildlife doesn't really need them. (Video via YouTube / CTLifestyles)

They're extremely useful to invasive pests like the destructive Japanese beetle, which feeds on the roots of turf grasses and prefers well-tended and well-watered lawns. (Video via Scotts Miracle-Gro)

If you're sticking with your lawn, the EPA has some suggestions to minimize the damage, like using less thirsty native plants and raising the blades on your mower, among other things.