What Do Embassies Have To Do With Diplomacy? 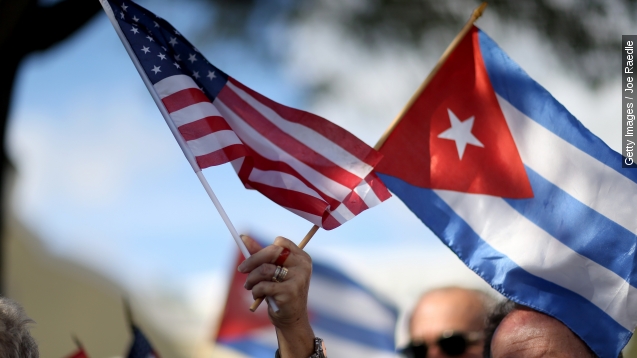 Two weeks after the U.S. removed Cuba from the state-sponsored terrorism list, a flagpole was put up in front of the Cuban Interests Section — which will probably be upgraded to the Cuban Embassy — in Washington, D.C. (Video via Al Jazeera)

The State Department defines an embassy as "the nerve center for a country's diplomatic affairs within the borders of another nation." Installing a flagpole and raising a flag is symbolic because it says, "Hey, we kind of like you! Glad we could work things out."

Embassies in Havana, Cuba and Washington, D.C. open up the lines of communication — essential for any relationship. They allow ambassadors and staff to closely work with the host country's government, report on issues dealing with bilateral relations and assist their country's respective citizens living within either Cuba or the U.S.

Embassies are also recognized as sovereign states set up in a host country's capital city. Perfect for, let's say, evading authorities. International rules say a host country can't enter another country's embassy without permission — even if there's a fire or a whistleblower. (Video via BBC)

Aside from the flags and international men of mystery, embassies are a kind of brick and mortar olive branch. The U.S. and Cuba could have both of their embassies up and running by the end of July.

This video includes images from Getty Images and music from arsonist / CC BY NC ND 3.0.