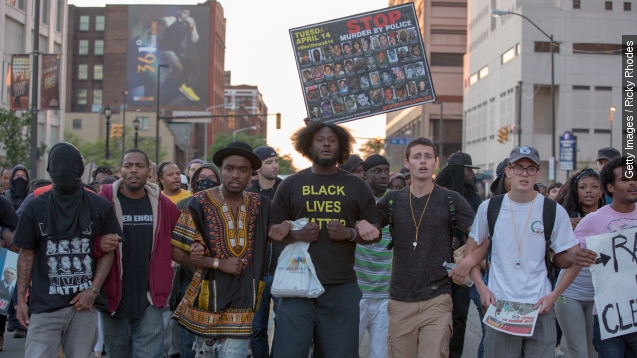 By Jasmine Bailey
May 26, 2015
Monday reports suggest the Department of Justice has reached a settlement with Cleveland. What might it entail?
SHOW TRANSCRIPT

As tension continues to grow between Cleveland residents and authorities, the city reportedly reached a settlement Monday with the U.S. Department of Justice over the conduct of its police officers.

First reported by The New York Times, the settlement comes just two days after Cleveland police officer Michael Brelo was acquitted of all charges in the shooting deaths of an unarmed couple in November 2012.

Following the verdict, the Justice Department announced it would further investigate "the testimony and evidence presented" at trial.

Which could be the focal point of the yet unknown details of the settlement. But as far as speculation — the settlement will likely include a roadmap, or at least recommendations, for systematic change within the Cleveland Police Department. (Video via Cleveland.com)

Especially when looking at the DOJ's past report of issues within the city's police force. In December, the department released scathing findings showing, among other problems, Cleveland police officers used "unnecessary and unreasonable force in violation of the Constitution at a significant rate."

​“Officers are not provided with adequate training, policy guidance and supervision to do their jobs safely and effectively. ... Cleveland is not alone in the need to address confidence between its police department,” Vanita Gupta said in December.

So what might we expect in the Cleveland settlement? We could find some precedent in recent DOJ recommendations. As The New York Times reports, nearly two dozen investigations have been opened by the DOJ under the Obama administration.

"In Seattle, the federal inquiry led local officials to overhaul training and focus on how officers can calm tense situations without using force. In Albuquerque, city officials agreed to change the way the police are trained, outfit officers with body cameras and improve how the department investigates officer-involved shootings."

Details of the settlement aside, the agreement will not only help prevent a lengthy and costly court battle, but it also gives the impression Cleveland city leaders are willing to compromise.

And even though the settlement is a step forward, a legal contributor for Al Jazeera says it's just a small step toward real change.

Areva Martian said, "Now it's time to talk about the solutions. What's happening that's different in these cities to affect and change these patterns and practices that we keep hearing about over and over again? ... How does Cleveland move forward?"

The settlement could be announced as early as Tuesday.