What Can The Colombia, FARC Deal Do About The Displaced? 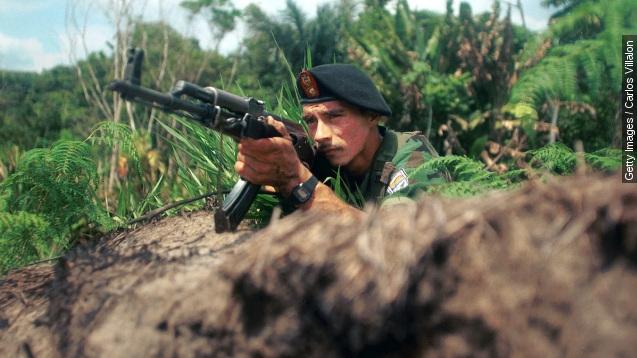 SMS
What Can The Colombia, FARC Deal Do About The Displaced?
By Karen Rodriguez
By Karen Rodriguez
October 1, 2015
Peace talks between Colombia and FARC are still ongoing. But it likely won't solve all the problems the country is dealing with.
SHOW TRANSCRIPT

Since talks began in 2012, both sides have reached agreements on four key issues:

-Political participation of rebels after the peace deal is finalized

-Elimination of the illegal drug trade

-Justice: amnesty for combatants, not including serious criminals

But with a deadline to sign the peace deal six months away, there are still a lot of problems to comb through on and off the negotiating table.

For instance, there's the issue of what to do about the millions of displaced Colombians, a problem the International Business Times calls "the war's biggest casualty" and the government's toughest challenge. (Video via United Nations High Commissioner for Refugees)

"The land that belonged to us is lost. It would be better to be taken somewhere else," a displaced Colombian said.

Colombia is ranked behind Syria as the country with the highest number of internally displaced people. An estimated 5.7 million Colombians have been forced from their homes, and about 220,000 have been killed from decades of violence. (Video via Al Jazeera)

"These groups started hurting all the people, including children. After the slaughter of four people, we decided to move, many went to San Jacinto in Bolivar, out of fear, because they threatened us," said a displaced Colombian.

Negotiations recently brought hope to the victims of the 50-year-long civil war. According to The Wall Street Journal, both sides agreed that a special "Tribunal for Peace" would be responsible for criminal investigations. "The tribunal will collect testimony and evidence, ensure victims are compensated and that sanctions are delivered to those who committed serious crimes, such as mass killings." (Video via FARC-EP)

"There must be justice and respect for institutions, for national and international rights so that peace can last," Colombia's President Juan Manuel Santos said.

And while the recent handshake between President Santos and FARC leader Rodrigo Londono "Timochenko" Echeverri had many media outlets calling it a "breakthrough" and a "historic" moment, there doesn't seem to be a plan for those waiting to return home. (Video via MSNBC)

While the peace deal with FARC is a step in the right direction, independent guerrilla groups that split from FARC are one of the obstacles the Colombian Government will still face. The peace deal won't stop the violence and criminal activity by those groups making it difficult for Colombians to return home.

The war has also made areas unlivable for Colombians, and the country's ability to cover the cost of rebuilding has yet to be seen.

While Colombia's economy has been fairly stable, the falling price of oil, its main export, has forced the government to be frugal for next year's budget. (Video via Presidencia de la República de Colombia)

One thing is for sure, Colombians will not return home without a guarantee of a better life. James Bosworth, director of analysis at Southern Pulse, an advisory firm told Business Insider, “Providing security, property rights, government services and economically viable lifestyles in rural areas will be essential to helping the displaced return home or resettle in a dignified manner."

Both sides agreed to sign a peace deal on March 23, 2016. Once it's signed, the Colombian people have to approve it via a referendum.