Birds Can Teach Us Something About Language 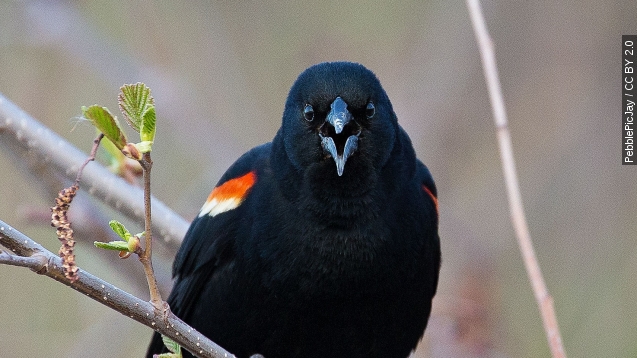 When you step outside in the morning, you might hear this, and, while it sounds pretty, it's probably pretty meaningless to you. (Video via YouTube / dry0shi)

And that makes sense. Language relies on "rearranging combinations of meaningless sounds" to make meaning.

From cuneiform to emojis, we've kind of always thought that was our thing, but now, some scientists think birds can do it, too. (Video via Youtube / Matthew Woodyard)

Researchers listened to this bird, the chestnut-crowned babbler — seems like an appropriate name.

They listened to its different calls and noticed how it made this sound to say it's flying — but added in another note when in its nest.

But the big thing here isn't just that birds can do it, it's what that tells us about the evolution of language. (Video via Youtube / Ari-Matti Nikula)

And considering language is, "the most powerful, dangerous and subversive trait that natural selection has ever devised." That's kind of a big deal. (Video via TED)

Especially because it's a struggle to figure out how we evolved languages. Historical linguists have to use a wide range of tools to figure that out, looking at similar words across languages to find their roots. (Video via University of Exeter)

Now consider that there are more than 10,000 species of birds in the world, and any single species can have a vocal range with more pitches than a piano, and you start to see how birds could easily put our human languages to shame.  (Video via Cornell Lab of Ornithology)

We can only make so many sounds, but from them we've created close to 7,000 different languages, and we're bamboozled when people figure out how to speak more than a couple of them, like Tim Doner. (Video via University of Michigan, THNKR)

Admittedly in terms of the meaning we can convey, our languages are way more complex, but the scientists note the bird vocalizations they observed roughly resemble emerging human languages, so it's possible birds are just getting started. (Video via New Line Cinema / 'Rush Hour', Big Think, Smithsonian Channel,

This video includes images from Jodie Crane and Liza / CC BY 2.0.