What Are Pete Rose's Chances To Get Back Into Baseball? 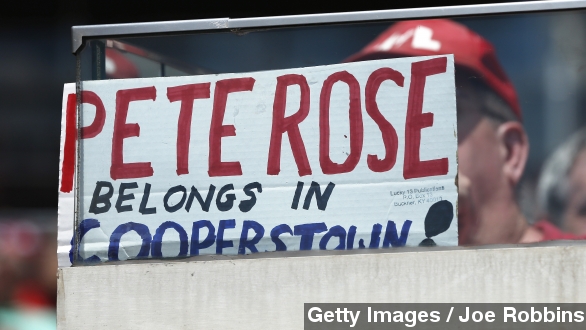 SMS
What Are Pete Rose's Chances To Get Back Into Baseball?
By Matt Moreno
By Matt Moreno
March 17, 2015
New MLB commissioner Rob Manfred will have final say on whether or not Pete Rose will be reinstated.
SHOW TRANSCRIPT

With a new, seemingly open-minded commissioner at the helm, infamously banned MLB player Pete Rose may now have his best shot yet to get back into baseball.

Robert Manfred is now in charge of Major League Baseball, and Pete Rose is going to see if he's got better luck with the new comish. Manfred says he's considering lifting Rose's ban after Rose recently submitted a formal petition for reinstatement.

"I know he's a busy man, and if I'm ever given a second chance, I'd be the happiest man in the world," Rose told WXIX.

Rose was banned from baseball in 1989 by then-commissioner Bart Giamatti for gambling on games.

"The banishment for life of Pete Rose from baseball is the sad end of a sorry episode," Giamatti announced.

"I have left Bart's ruling stand for a number of reasons," Selig told CBS.

Still, how seriously Manfred is considering Rose's plea is up for debate.

"I think it's one of those deals where somebody asks him a question, he says: 'I'm not necessarily against this thing. I will keep it in mind.' I wouldn't say it is likely," Grantland writer Jonah Keri said.

Manfred says he'll review Giamatti's decision, the evidence against Rose, and he'll hear from Pete Rose himself. He said, "I'll make a decision once I've done that." It's a topic, though, that Manfred knew he'd be dealing with as the new face of Major League Baseball.

"I'll have to deal with that issue when it hits my desk," Manfred said in a January interview with ESPN.

Rose, after all, agreed to the lifetime ban in 1989, though it did come with the caveat that he could apply for reinstatement. Now, there seems to be overwhelming support to get Rose back in baseball — at least on a limited basis.

CBS Sports' Dayn Perry writes there's still a lot more to it, though. "I see two distinct questions: First, should Rose be reinstated, and, second, should Rose be in the Hall of Fame? No and yes are the answers, respectively. ... The Hall of Fame is a baseball museum, not a gallery of the well behaved, and it should tell baseball's story," Heyman says.

While The Boston Globe's Nick Cafardo differs, saying he should be definitely be reinstated, but, "It should be up to either the BBWAA or the Veterans Committee to decide his (Hall of Fame) fate. Vote on him like we do the steroid guys."

The 73-year-old with shoo-in Hall of Fame stats confessed to gambling on games in his 2004 autobiography. Rose leads Major League Baseball with the most hits of all time with 4,256.