What An Ancient Jawbone Could Tell Us About Human Evolution 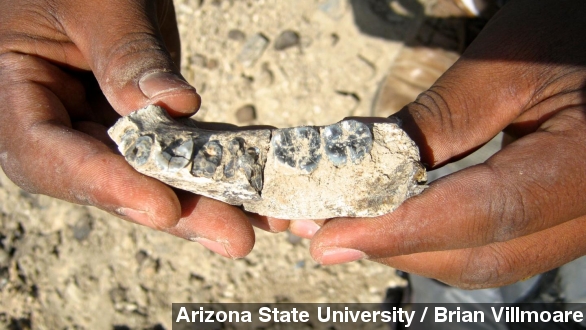 This ancient jawbone could present an important clue in our understanding of how humans evolved.

Researchers found the bone at a dig site in northern Ethiopia and dated it to around 2.8 million years ago. (Video via Arizona State University)

ASU professor Kaye Reed said, "We don't have very many other hominid species at all between the time period of 3 million and 2.5 million years ago."

When it comes to understanding how our genus, Homo, evolved, there's a gap in the fossil record, which makes the jawbone find even more significant. (Video via Smithsonian Institution)

At 2.8 million years old, the jawbone is closer to the latest-known fossils of Australopithecus afarensis, a pre-Homo species also found in Ethiopia, famously in the form of the Lucy skeleton. (Video via PBS)

But through detailed examination of the jawbone, the researchers noticed important differences in the teeth, which much more closely resemble later species of Homo than Australopithecus.

Those differences have led to that description of the jawbone as representing the first human that we know of. (Video via BBC)

The researchers' findings were released alongside another paper that looked at how the changing ecology of the region of Ethiopia where the bone was found could've played a role in human development. (Video via University of Bristol)

That paper says the region, known as the Afar, gradually switched from a forest environment to grassland, which could've led to the development of the genus Homo. (Video via Discovery)

Despite the declarations that this jawbone represents the first human, the researchers want to hold off on naming it a new species until more bones are found.