What Agent Orange Does To The Body 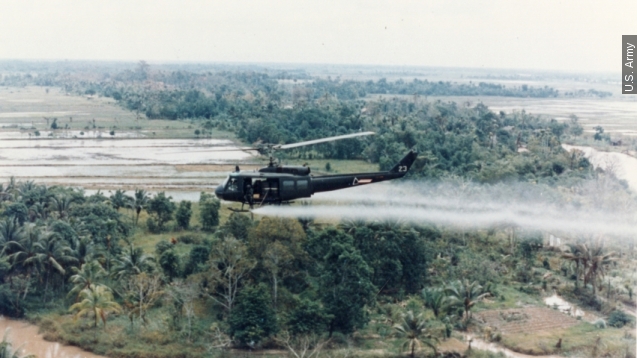 More than 2,000 U.S. airmen who suffered from Agent Orange exposure will receive a total of about $47.5 million in benefits from the Department of Veterans Affairs. A January report on the herbicide is getting much of the credit for the decision announced Thursday.

Vets have to prove they worked on a C-123 aircraft contaminated with the substance during the Vietnam War and that they're showing symptoms.

In Vietnam, America dropped more than 19 million gallons of herbicides, with Agent Orange being the favorite. The hope was that the chemicals would strip Vietnam of its dense trees and give U.S. soldiers the upper hand.

The reason Agent Orange is so dangerous is because of the chemical dioxin. Once in the body, it can hit just about everything — including the nervous, respiratory and circulatory systems.

It's also not water-soluble, meaning it doesn't degrade easily, and genetic effects can be passed down through generations after one person's exposed.

For some vets, the first symptoms began with blurred vision, memory loss and lack of concentration. From there, the symptoms can get a lot worse.

Agent Orange has been linked to prostate cancer, lung cancers, Parkinson's disease and birth defects. After coming back from the war, soldiers and their children born after the war began to show symptoms. (Video via Java Films / "The Children of Agent Orange")

Vets began protesting as effects showed, but the VA said there was a lack of evidence to support their claims. (Video via The New York Times)

"We don't mean to say there isn't an Agent Orange effect, but at this point in time we don't seem to see anything that confirms that there is something there specifically," Dr. Alvin Young from the VA Agent Orange Task Force said in media clips compiled by The New York Times.

The VA eventually backtracked, and in 1991, the Agent Orange Act was passed — allowing vets to receive benefits.

On Thursday, the secretary of the VA said in a statement, "Opening up eligibility for this deserving group of Air Force veterans and reservists is the right thing to do."