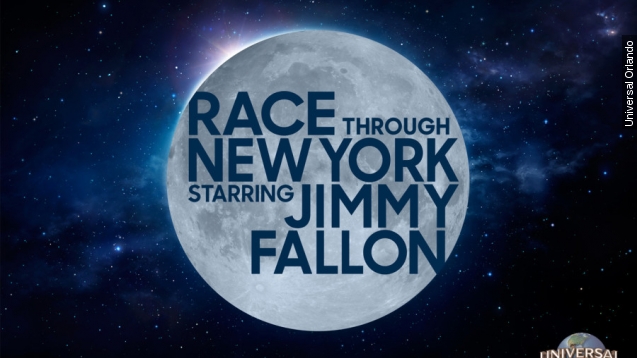 Imagine this: You're walking through Universal Studios Orlando, contemplating the possibility of remaining a child forever, when you come across a ride called Race Through New York Starring Jimmy Fallon.

You don't have to dream it. Come 2017, the ride featuring the late-night talk show host will be a reality.

Unfortunately, the ride will replace the iconic Twister attraction, so we're wondering how the simulated tour of the Big Apple could possibly make up for that theme park masterpiece. (Video via NBC / "The Tonight Show")

For starters, Fallon told his audience the ride will be similar to the Harry Potter roller coaster at Universal Studios' sister park, Islands of Adventure. (Video via NBC / "The Tonight Show," iThemePark)

This little hint tells us that some of Fallon's celeb besties could make cameos just as Hermione and Ron appear on the Potter coaster. After all, what's an accurate Fallon coaster without an appearance from Justin Timberlake?

We could also see John Krasinski showing up on the ride. He is the reason the world now has Spike's "Lip Sync Battle," which was turned into its own show after it became a hit on Fallon's show.

We're guessing the storyline for the attraction will take place at night. The creative director for Universal said on the company's blog the ride will start in the "Tonight Show" studio at 30 Rockefeller Center for what Universal calls a "very special taping."

We're going to take a shot in the dark and guess the ride's plot: Fallon leaves the studio to go meet JT at a bar. He trips, injures his hand, and we travel through New York in the back of an ambulance in a mad rush to save his hand ... potentially all caused by his love for partying. (Video via NBC / "The Tonight Show")

"Everything in the silver cup is tequila. ... First to make their opponent drink five shots wins," Fallon says.

Fallon told Vulture his fave part of the city is interacting with drunk people. Let's hope the liquor leads to a re-enactment of "The History of Rap" before he gets injured.