What A 200-Year-Old Whale Is Teaching Scientists About Aging 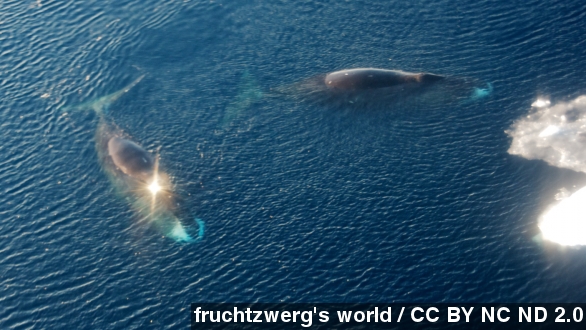 The Bowhead whale can live to be 200 years old or more, and now scientists are hoping clues to longevity could be found in the whale's DNA.

As the longest-lived mammal, scientists hoped sequencing the Bowhead whale's genome would shed light on how the whale's DNA is adapted to living so long. (Video via Scripps Institution of Oceanography at UC San Diego)

In their findings, published Tuesday, the researchers say they were able to compare the whale's genes to that of other animals and that some genes associated with increased cancer risk in humans had been deactivated.

The scientists also created an open database with all of their findings, and encouraged other scientists to use the data however they wished, including the whale's genome.

But they made an effort to stress that this is a long, long way from any miracle cure for aging or cancer, in part because they can't actually experiment on the whales. That means they need something else to experiment on.

Dr. Joao Pedro Magalhes told RT, "The obvious next step would be to take some of the genes from the bowhead whale, put them in mice, and then actually see if the mice would live longer and be disease resistant, which would really be the proof that we now need."

The scientists' interest might be academic, but as CBS points out the research's backers have one clear goal in mind — finding a "magic potion" to stop aging.

The research was funded largely by the Methuselah Foundation, a non-profit that supports anti-aging research and the Life Extension Foundation, a dietary supplement vendor.

Still, it will take years of experimentation before scientists can pinpoint the causes for the whale's longevity, and as the lead researcher on the project told CBS, there won't be any bowhead whale supplements on the shelves anytime soon. (Video via National Geographic)

This video includes an image from fruchtzwerg's world / CC BY NC ND 2.0.