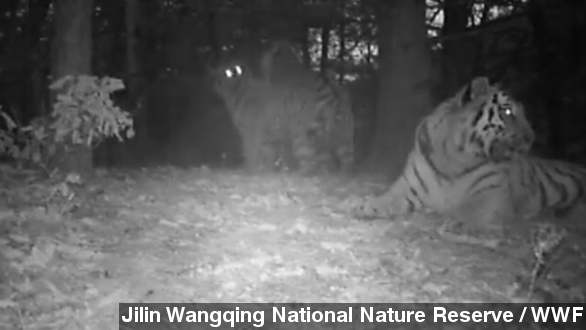 This is a family of Amur tigers, captured on video by a World Wildlife Fund camera trap in a nature reserve in China. (Video via World Wide Fund for Nature)

A 10-second black-and-white video of the tigers — also known as Siberian tigers — might not seem like a big deal, but given the fact that the family had two juveniles, it is.

The WWF says because there are two juveniles in the group some 18 miles from the Russian border, that shows the tigers are breeding in China. (Video via Google Earth)

It's not the first time an Amur tiger has been captured on film in the Wangqing Nature Reserve. A camera trap snapped a picture of one there in 2012.

But the majority of the remaining Amur population in the wild, which conservationists estimate totals around 400, live on the Russian side of the border. (Video via International Fund for Animal Welfare)

Poaching drove the tigers to the brink of extinction, and it's still a big problem, but government protection and efforts to rehabilitate tiger populations have raised numbers from about 40 in the 1940s to 400 today. (Video via Al Jazeera)

In particular, the WWF points to its work in restoring the Amur tiger's natural prey, including wild boar, as one reason the population has found a foothold in China.

Tigers, in general, are one of the most endangered species in the world. They have been eradicated in 93 percent of their natural range, and their numbers in the wild reduced from 100,000 at the turn of the 20th century to just above 3,000. (Video via National Geographic)

As The Guardian reports, Russia is currently conducting a tiger survey with more than 2,000 people and hopes to see Amur tiger numbers rise to 600, while the WWF has set a goal of doubling global tiger numbers by 2022.

This video includes an images from Getty Images and Smithsonian Wild / CC BY NC SA 2.0.