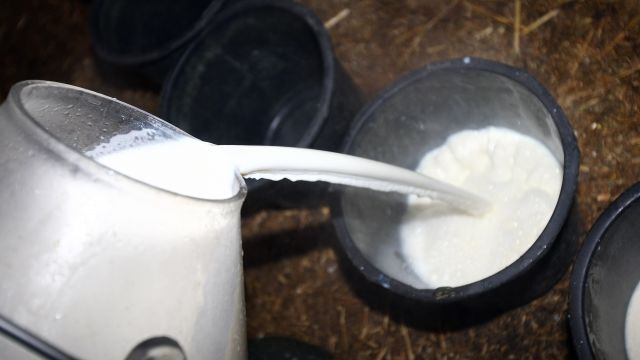 A glass of raw milk in the West Virginia Capitol has led to either a cruel irony or a really unfortunate coincidence.

So here's what happened: Last week, West Virginia passed a bill loosening restrictions on sharing and drinking raw, unpasteurized milk. Apparently, some lawmakers passed around a glass of raw milk to celebrate.

Since then, there's been a rash of stomach problems going around the state Capitol. Afflicted lawmakers claim they've just been hit by a run-of-the-mill stomach bug, but health officials are investigating whether the raw milk might be responsible.

We should point out that correlation is not causation; so far, the state hasn't linked any of the illnesses to a bad batch of milk. But the story does raise the question: Why did these legislators take the risk in the first place?

Most of the milk we drink has been pasteurized, or briefly heated to a very high temperature, in order to kill off dangerous pathogens which can reside in dairy products. The Centers for Disease Control and Prevention estimates 79 percent of dairy-related outbreaks between 1998 and 2011 came from raw dairy products.

But raw milk advocates claim pasteurization kills more than germs; they say it also destroys the flavor and nutrients of natural milk. Whether or not that's true, raw milk has gained enough support to be legalized in several states.

Despite loosening up its prohibition on raw milk, West Virginia still punishes the sale or offering of raw dairy to the public with a fine of $50 to $500. The delegate who brought raw milk to the Capitol is being close-mouthed about where he got it but admits it might have been an illegal transaction.

This video includes clips from WDTV, the U.S. Food and Drug Administration and California Milk.