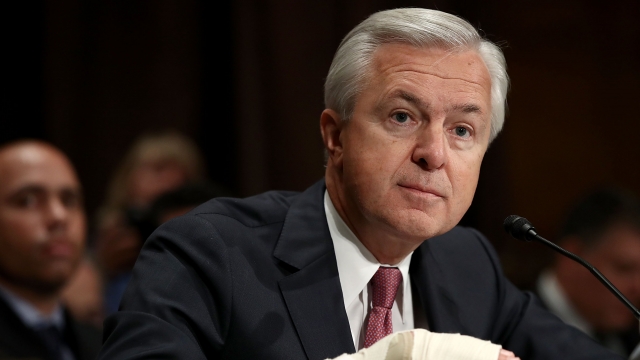 SMS
Wells Fargo's Scandal Costs Its CEO Millions — Which Isn't Much To Him
By Grant Suneson
By Grant Suneson
September 27, 2016
Wells Fargo CEO John Stumpf is forfeiting $41 million in stock awards in the wake of his company's fake account scandal.
SHOW TRANSCRIPT

As his bank weathers an ongoing scandal, Wells Fargo's CEO John Stumpf is forfeiting $41 million in stock awards plus some salary. But it's tough to feel bad for someone who would stand to make double that even if he was fired.

That money could help offset the $185 million the company agreed to pay in fines and penalties after it was caught making phony bank accounts to inflate sales numbers.

More than 5,000 employees were fired over the scandal. The company is launching an internal investigation about the sales culture that let employees fabricate their performance numbers.

Stumpf will also forfeit any bonuses for the year, which might be almost as painful as the tongue-lashing he got from Sen. Elizabeth Warren.

"You squeezed your employees to the breaking point so they would cheat customers and you could drive up the value of your stock and put hundreds of millions of dollars in your own pocket," Warren said.