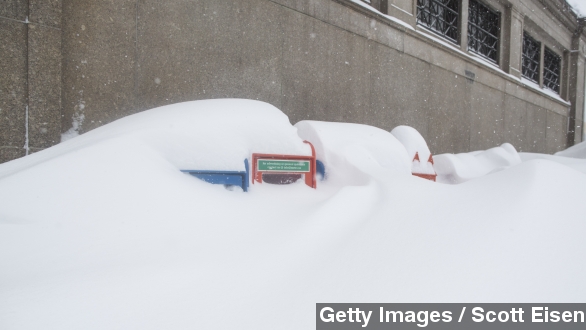 SMS
Weekend Storm Dumps More Snow On Still-Buried Northeast
By Evan Thomas
By Evan Thomas
February 22, 2015
The latest storm could add as much as 10 inches of snow in places.
SHOW TRANSCRIPT

A winter storm dropped another sizable amount of snowfall in the area over the weekend with some places recording upwards of 10 inches. (Video via The Weather Channel)

When it's all said and done this weekend, Washington, D.C., could get six inches, Baltimore up to 10 and Boston adding to their snow-filled streets with five inches.

In Boston especially, the silver lining is hard to make out, buried as it is under record snowfall.

The National Weather Service branch there expects by Sunday, the city will have more than 100 inches of accumulated snow for the winter season.

It's also the snowiest month Boston has ever seen. The National Weather Service says a record 62.6 inches of snow has fallen in February, shattering the previous record of 43.3 inches in January 2005. (Video via CNN)

Repeated storms have shut down infrastructure and strained the already overloaded clearing efforts of close to 600 plows and a set of snow-melting machines. (Video via WHDH)

Last week, Boston Mayor Martin Walsh told reporters: "I don't know what to say to anybody anymore. Hopefully it will stop eventually."

Due to the weekend's storm, air travel across the rest of the country is a mess. Going into Sunday, FlightAware reports more than 2,500 flights were delayed and more than 700 were cancelled. (Video via KTLA)

Boston forecasters with the National Weather Service said temperatures could climb slightly on Sunday, but they won't last long.

A cold front is expected to roll through the area overnight, sending Monday and Tuesday temperatures back down below average.