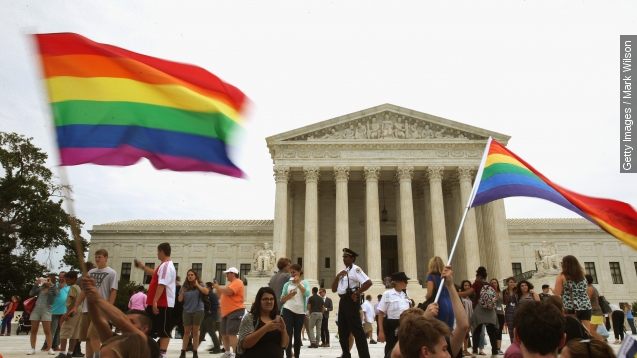 "The way she said it just kind of spitted venom, and it makes me ill," Clinton Brentwood Lee told WFTS.

Photographer Clinton Brentwood Lee told Newsy's partners at WFTS a client fired him for posting these profile pictures to his company's Facebook page in support of same-sex marriage.

The client, who Lee will not name, sent him a message on Facebook firing him. It said she and her fiance support "traditional marriage...and don't want our money going to places that support otherwise."

Lee responded by telling the woman he decided to donate the $1,500 retainer he'd received from her to GLAAD, an advocacy group for gay and lesbian rights.

He wrote: "Thank you very much for your donation and support for this great cause! I couldn't have done it without your money."

The woman's next response included derogatory language we won't show. She did say companies like Lee's were "the reason our country is falling apart!"

Lee says many people against same-sex marriage are rating his company poorly on Facebook and writing what he calls "horrible stuff" in his guestbook. But he says he's received many positive messages as well, despite saying he's no LGBTQ advocate.

"I'm a straight guy by the way. ... I've had people call me the gay photographer, the guy who shoots gay weddings –– I'm just a guy who said, 'No, I think you're wrong,'" Lee said.

While someone might say the way the woman fired Lee was uncalled for, other more mild arguments against critics of same-sex marriage are being grouped in a similar light.

The four Supreme Court justices who opposed the recent gay marriage ruling argued they did not have the judicial power to subvert democratic processes. One judge said the members of the dissenting group are now being "labeled as bigots."

Pop culture may be giving truth to that claim. For instance, at a recent concert, singer Ariana Grande got the crowd cheering following her derogatory comment towards those four justices, and she hasn't received much criticism.

A joint poll by The Washington Post and ABC in April showed same-sex marriage had its highest level of support ever, with 60 percent of Americans in favor.