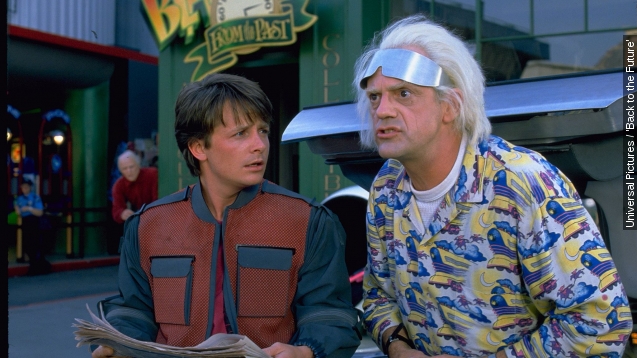 Back to the future? No. To the present? We've officially reached the "future" from "Back to the Future Part II."

If you remember from the film, when Marty McFly travels back to the future, it's Oct. 21, 2015. (Video via Universal Pictures / "Back to the Future Part II")

Considering that the film was released in 1989, it was pretty spot-on for predicting the ways of the "future." Except for the double ties. Those will never be OK.

We do have a hoverboard (sort of) and hand-held computers — that you could use to sign a petition to save a clock. We also have two Florida baseball teams now: the Miami Marlins and Tampa Bay Rays.

And if you took the movie's advice and put money on the Cubbies this year, you might be in luck. The Cubs are one of the last four teams still standing in the playoffs, and they've got pretty good odds of at least making it to the World Series.

We're also beyond consumed with personal electronics and have hundreds of TV channels, so major props are due to whoever did the futuristic research for the film. (Video via Hulu)

But there were a few aspects of the "future" we didn't have — until now.

"'Jaws 18: Origins,' the mind-blowing reboot. Now, the oceans are disappearing and to save their home, the sharks must attack. 'Jaws 19' — this time, it's really, really personal," the narrator says in the trailer.

OK, so maybe we don't have a "Jaws 19" film on the horizon, but we, the people, are definitely in a phase where we love reboots, origin films and sequels. "Fast and Furious," anyone?

And thanks to Pepsi, we can buy the same Pepsi Perfect drink McFly buys in the movie. It's the same Pepsi formula, but it comes in a limited-edition bottle. (Video via Pepsi)

Finally, Nike is releasing a shoe style similar to the self-lacing Nike Mag shoes worn in "Part II." According to a Nike patent, the shoes include "power laces" that tighten on motorized rollers when you put them on.

And if you're really excited for this epic opportunity of being able to say you lived through Marty McFly's future, there's a countdown website showing the current time, the "destination time" of Oct. 21, and the last time the DeLorean departed in 1985. I feel old. (Video via Universal Pictures)