We Still Have Questions About Hillary Clinton's Emails 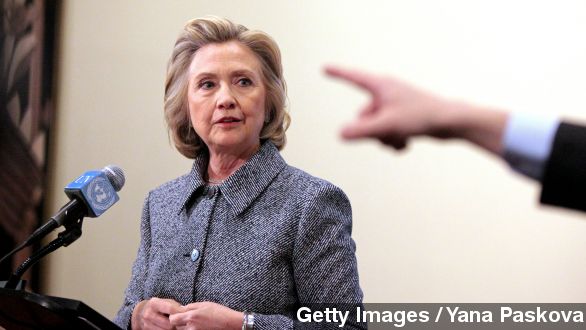 Seven years later, Hillary Clinton insists she's just as transparent, giving the State Department access to all of her work-related emails from her time as Secretary of State. And while that was meant to end the controversy over her emails, it actually created more questions.

"I chose not to keep my private personal emails," Clinton told reporters.

It's up to Clinton and her team to decide what's private and what's public.

Her camp released this nine-page fact sheet, explaining her private email account contained 62,320 emails, about half of which were considered work-related and turned over to the State Department for review.

The rest — nearly 32,000 emails — were deemed private and from what it sounds like, they were deleted.

"I am very confident of the process that we conducted and the e-mails that were produced," Clinton said. (Video via C-SPAN)

That process did not involve a review of every single one of her 62,000 or so emails. Instead, her lawyers came up with a method that arguably left room for something to slip through the cracks.

To find work-related emails, they collected all communications sent to .gov email addresses. They also searched her emails for names of government officials and key words like "Benghazi" and "Libya." (Video via U.S. Department of State)

It's unclear if emails related to her private charity were flagged and in particular, those related to its controversial foreign donors. (Video via Clinton Global Initiative)

Theoretically, Clinton could have been communicating with a world leader for non State Department business, and we'd have no way of finding out.

"When I got to work as Secretary of State, I opted for convenience to use my personal email account, which was allowed by the State Department," Clinton said.

It's true that there is a law requiring government officials use government accounts for government business. But President Obama didn't sign that law until about two years after Clinton left office. (Video via U.S. Department of State)

For her critics, it's not so much a question of whether she followed the letter of the law but the spirit of it.

Since 2005, it’s been State Department policy that "normal day-to-day operations be conducted on an authorized (Automated Information System)." In other words, personal email accounts really shouldn't be used at work.

That's part of the reason the U.S. ambassador to Kenya lost his job in 2012.

"It does appear like there was a different standard that was used in my case," former U.S. Ambassador to Kenya Scott Gration said on CNN.

On Wednesday, the Associated Press announced it's suing the State Department for access to a batch of Clinton's emails. The AP has previously requested them under the Freedom of Information Act but hadn't received them. It's unclear whether any are considered private and have been deleted.