We See Right Through This Crystal Pepsi Marketing Ploy 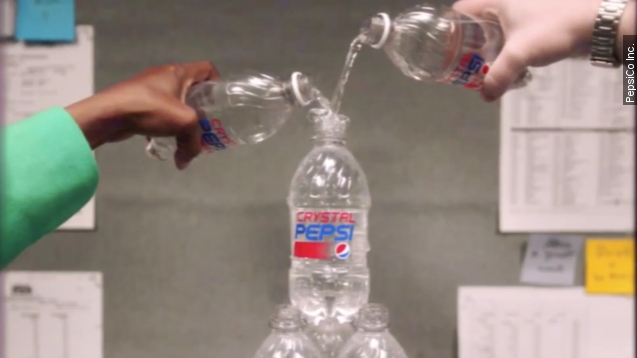 Hey, '90s fans. Get ready for a blast from the past in the form of a clear, carbonated beverage you might remember.

Yes, Pepsi announced via its YouTube channel that its caffeine-free, "crystal" clear soda is comin' back but not to stores. Not yet, anyway.

"We're finally ready to relaunch Crystal Pepsi," a man in the ad says.

"Crystal Pepsi? I thought they shut that division down decades ago," another man says.

If you believe the ad, which you shouldn't, turns out the division never shut down: They've just been perfecting it.

For a chance to crack open a can of the soda, fans have two choices: download the Pepsi Pass app, or go to PepsiPass.com.

Once downloaded, you connect the app with Facebook. And from there, you get points by doing several things, including hanging out with fellow Facebook friends who also have the app.

Then, you can use those points toward rewards, including entries to win a six-pack of Crystal Pepsi.

The company is giving away 13,000 six-packs, and in turn is getting some major promo for its app.

Pepsi can apparently give us a blast from the past and the future all in the same year.

"The future is now!" the ad sings.

It's the year of '90s soda comebacks. Surge, anyone?

Correction: A previous version of this story misstated the sweepstakes entry process. Fans may enter either on pepsipass.com or through the Pepsi Pass app. This video has been updated.