We Can't Defeat The Robots; We Can Only Slow Them With Banana Peels 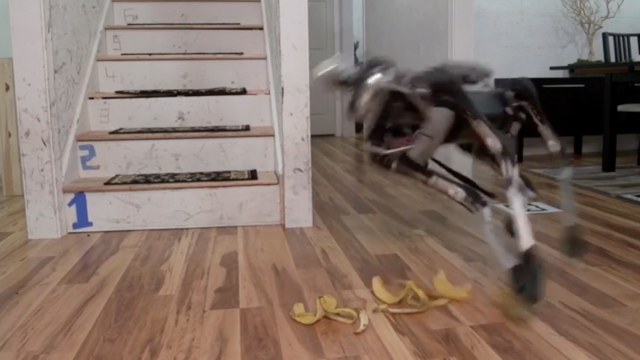 SMS
We Can't Defeat The Robots; We Can Only Slow Them With Banana Peels
By Evan Thomas
By Evan Thomas
June 24, 2016
Robots still lack some subtle and not-so-subtle abilities we humans take for granted, but that might not always be the case.
SHOW TRANSCRIPT

We might not be to the point of androids yet, but our semi-autonomous robots are getting more advanced all the time. They can fly on their own and run really fast and even help us drive our cars.

Robots are expected to take over a lot of human jobs soon, in commerce and food service, warehouse work and farming.

But we need not fear a robotic uprising yet. As long as we have banana peels to deploy against the machines, we'll probably stay safe.

That is to say autonomous robots still have trouble with some of the subtle things we humans take for granted — things like fine balance at high speeds and depth perception.

A closed door is still a robot's worst nightmare. You and I know how to grab and release a handle and maintain our balance and get through the opening without whacking any of our limbs. For a robot, that's a lot to juggle at once.

And don't even ask about stairs. You probably haven't had to think this hard about them since you were learning to walk.

Robots also lack traditional brains, so for now, we humans still have the intellectual advantage. It will take longer for robots to compete with us on creative thinking or high-level decision making.

Google and NASA and others are working on this, though. Google thinks quantum computing could lead to breakthroughs in artificial intelligence.

IBM's Watson isn't true AI yet, either. But it's getting pretty smart as it chews on big piles of unconnected data and determines relationships from it.

When these efforts will start to compete with actual human intelligence is a matter for the futurists. But you should maybe start brushing up on your AI manners because black ice isn't slowing the robots down much anymore, and the banana defense grid won't last forever, either.