We Can Hear Them Now: 40K Verizon Workers Go On Strike Over Contracts 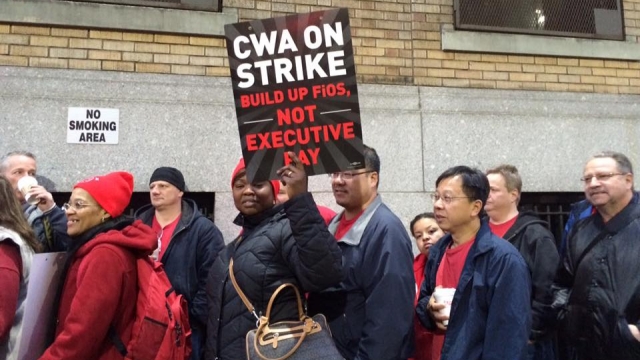 SMS
We Can Hear Them Now: 40K Verizon Workers Go On Strike Over Contracts
By Melissa Prax
By Melissa Prax
April 13, 2016
Nearly 40,000 Verizon workers went on strike because they say issues with their contracts were never resolved.
SHOW TRANSCRIPT

Nearly 40,000 Verizon workers on the East Coast protested Wednesday morning — close to the number of all U.S. workers who went on strike in 2015.

Employees from Massachusetts to Virginia are unhappy with the current contract conditions — like wages and benefits.

A Verizon technician on strike said, "The company wants to basically relocate jobs on a moment's notice."

But Verizon's chief administrative officer said: "Since last June, we've worked diligently to try and reach agreements that would be good for our employees. ... Unfortunately, union leaders have their own agenda rooted in the past and are ignoring today's digital realities."

IBEW and Communications Workers of America, which organized the protests, say a strike is "always the last resort."

There's no word when the strike will end, but Verizon has brought in temporary employees.

This video includes clips from Facebook / Stand Up to Verizon, WHDH, WCBS, Verizon and WPRI.