'We Are All Osama': Bin Laden's Son Pledges To Continue Father's Fight 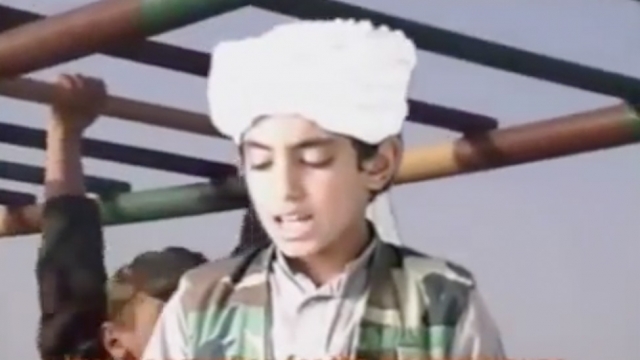 SMS
'We Are All Osama': Bin Laden's Son Pledges To Continue Father's Fight
By Matt Moreno
By Matt Moreno
July 10, 2016
In a video message posted on a militant website, Hamza bin Laden reportedly called for more attacks targeting the U.S. at home and abroad.
SHOW TRANSCRIPT

Osama bin Laden's son is reportedly planning revenge on the U.S. after his father's death.

In a 21-minute speech titled "We Are All Osama" posted to a militant website, Hamza bin Laden pledged to continue the militants' fight against the U.S.

In a translation of the speech posted by the Daily Pakistan, Hamza bin Laden said, "We will continue striking you and targeting you in your country and abroad in response to your oppression of the people of Palestine, Afghanistan, Syria, Iraq, Yemen, Somalia and the rest of the Muslim lands that did not survive your oppression."

He continued, "As for the revenge by the Islamic nation for Sheikh Osama, may Allah have mercy on him, it is not revenge for Osama the person but it is revenge for those who defended Islam."

Hamza bin Laden has recently stepped up his role in Al-Qaeda, posting an audio message in May urging Syrian jihadists to take action to liberate Palestine.

In that message, he said: "The Islamic umma (nation) should focus on jihad in al-Sham (Syria) … and unite the ranks of mujahedeen. There is no longer an excuse for those who insist on division and disputes now that the whole world has mobilized against Muslims."

It's left many wondering if Hamza is the future leader of the terrorist group.

Osama bin Laden was shot and killed by a team of U.S. Navy SEALs in May 2011.

This video includes clips from Al-Qaeda and images from Getty Images.